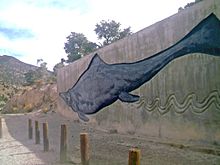 Shonisaurus is the largest ichthyosaur, and the largest extinct marine animal that has yet been found. It was found first in rocks of the Upper Triassic in Nevada, and later in British Columbia.

The two known species of Shonisaurus with an adult human to scale.

Fossils of Shonisaurus were first found in a large deposit in Nevada in 1920. Thirty years later, they were excavated, uncovering the remains of 37 very large ichthyosaurs. These were named Shonisaurus, ("Lizard from the Shoshone Mountains"). Shonisaurus lived 216–203 million years ago.

S. popularis was about 15 metres (50 ft) long. A longer specimen is now placed in Shastasaurus rather than Shonisaurus. Shonisaurus had a long pointed mouth that contained teeth only at the front end. It had a large whale-like body, a long dolphin-like snout, and its flippers were much longer, and narrower than in other ichthyosaurs. All of these features suggest that Shonisaurus may be a relatively specialised offshoot of the main ichthyosaur evolutionary line.

The first species discovered, S. popularis, was adopted as the state fossil of Nevada in 1984. Excavations, begun in 1954 under the direction of Charles Camp and Samuel Welles of the University of California, Berkeley, were continued by Camp throughout the 60s.

The Nevada fossil is at the Berlin–Ichthyosaur State Park, Nevada, USA. The park has several undisturbed ichthyosaur fossils of the species Shonisaurus popularis as well as the early-20th Century ghost town of Berlin. The park is about 150 miles (240 km) east of Reno.

The discovery of S. sikkanniensis in British Columbia in the 1990s made S. popularis the smaller of the Shonisaurus species. An ichthyosaur found in the Himalayan mountains called Himalayasaurus, may be the same animal as Shonisaurus. 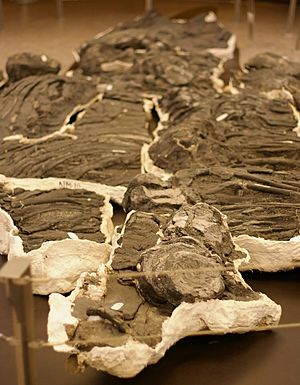 The British Columbia specimen was described as follows:

"The ichthyosaur Shonisaurus sikanniensis... type specimen is considerably larger than Shonisaurus popularis, with an estimated length of 21 m. It also differs from S. popularis in having a fan-shaped scapula, and relatively longer vertebral centra... Teeth are set in sockets, but are known only in a few, small individuals. This implies that teeth were present only in juveniles, and that adults were edentulous (without teeth).

"Isolated elements from other localities suggest that larger individuals existed... The [site] ... is from the final stage of a late Triassic marine transgression (deepening) along the noth-west coast of Pangea. It was deposited in a deep-water, distal shelf setting, well below wave base".

Its slender skull and lack of teeth except at the front are obvious adaptations to its method of feeding. They are like those of modern whales which feed on squid, such as the pilot whale and sperm whale.

All content from Kiddle encyclopedia articles (including the article images and facts) can be freely used under Attribution-ShareAlike license, unless stated otherwise. Cite this article:
Shonisaurus Facts for Kids. Kiddle Encyclopedia.