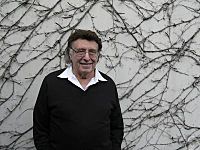 Kostant at a workshop on “Enveloping Algebras and Geometric Representation Theory” in Oberwolfach, 2009

Bertram Kostant (May 24, 1928 – February 2, 2017) was an American mathematician. He was known for his works in Kostant partition function and Kostant–Parthasarathy–Ranga Rao–Varadarajan determinants. In 2016, he won the Wigner Medal. He worked at the Massachusetts Institute of Technology and at the University of California, Berkeley.

Kostant was born in Brooklyn, New York. He studied at the University of Chicago.

Kostant died at a rehabilitation center in Roslindale, Massachusetts on February 2, 2017 from stroke complications, aged 88.

All content from Kiddle encyclopedia articles (including the article images and facts) can be freely used under Attribution-ShareAlike license, unless stated otherwise. Cite this article:
Bertram Kostant Facts for Kids. Kiddle Encyclopedia.