Berwick Castle is a ruined castle in Berwick-upon-Tweed, Northumberland, England. 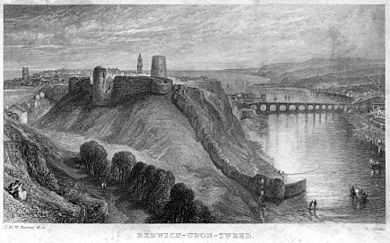 19th-century engraving of Berwick Castle by William Miller after J.M.W. Turner, with Berwick Old Bridge from 1624 in the background.

The castle was commissioned by the Scottish King David I in the 1120s. It was taken by the English forces under the terms of the Treaty of Falaise in 1175 but then sold back to Scotland by the English King Richard I to fund the Third Crusade in around 1190.

In November 1292, representatives of the English King Edward I arrived in Berwick and announced, in the great hall of the castle, King Edward's adjudication in favour of John Balliol of the dispute between him, Robert the Bruce and the count of Holland for the Crown of Scotland. The castle was retaken by the forces of King Edward I in March 1296 during the First War of Scottish Independence. However, the forces of Robert the Bruce recovered the castle for Scotland in April 1318. 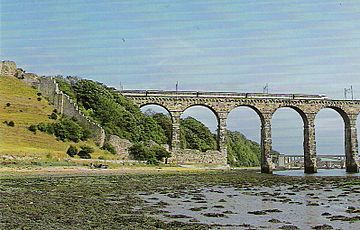 Remains of the castle Curtain Wall (left) next to the Royal Border Bridge of 1850 over the River Tweed.

In 1330, "Domino Roberto de Lawedre" of the Bass, described as Custodian or Keeper of the Marches and the Castle of Berwick-upon-Tweed, received, apparently upon the termination of his employment there, £33.6s.8d, plus a similar amount, from the Scottish Exchequer.

In 1464, the Exchequer Rolls of Scotland record that Robert Lauder of Edrington was paid £20 for repairs made to Berwick Castle. The castle finally fell into English hands in the last week of August 1482: after invading Scotland following a pact with the Duke of Albany, Richard, Duke of Gloucester captured the castle from the 1st Lord Hailes.

The castle was rendered obsolete by the construction of modern ramparts around Berwick during the reign of Elizabeth I in the late 16th century and it went into steady decline. In August 1590 John Selby reported that a round tower used as the castle's only gun emplacement had collapsed in wet weather. Large parts of the structure were simply used as a quarry (notably for the construction of the parish church, Holy Trinity during the Commonwealth).

Perhaps most damagingly of all, in 1847 the Great Hall of Berwick Castle was demolished to make way for Berwick-upon-Tweed railway station.

Governors, or keepers, of the castle

All content from Kiddle encyclopedia articles (including the article images and facts) can be freely used under Attribution-ShareAlike license, unless stated otherwise. Cite this article:
Berwick Castle Facts for Kids. Kiddle Encyclopedia.