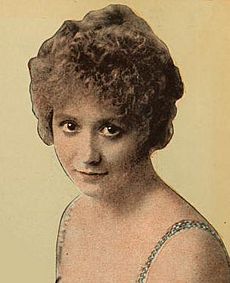 Elizabeth Barry Scale (also known as Bessie Barriscale; September 30, 1884 – June 30, 1965) was an American actress. She was especially popular in silent movies and on the stage. She began her movie career around 1913. Her movies included The Woman Michael Married in 1919 and The Skirt in 1921. She returned to stage with Women Go On Forever.

Barriscale was born in New Jersey. She died in California at age 80.

All content from Kiddle encyclopedia articles (including the article images and facts) can be freely used under Attribution-ShareAlike license, unless stated otherwise. Cite this article:
Bessie Barriscale Facts for Kids. Kiddle Encyclopedia.