John Leslie "Jackie" Coogan (October 26, 1914 – March 1, 1984) was an American movie, television, child, stage, radio, voice, silent movie actor, and comedian. He was known for his roles as The Kid in Charlie Chaplin's The Kid and as Uncle Fester in The Addams Family. A law is named after him in the state of California, "The Coogan Act". 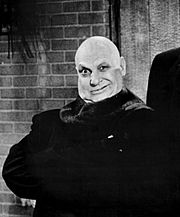 Coogan as Uncle Fester in The Addams Family, 1966

Coogan was born on October 26, 1914 in Los Angeles, California. He studied at the University of Southern California and at the Santa Clara University before he dropped out.

Coogan has one son with Grable, one daughter with McCormack, and has a son and daughter with Lampere. His grandson is actor Keith Coogan, by his daughter Leslie.

All content from Kiddle encyclopedia articles (including the article images and facts) can be freely used under Attribution-ShareAlike license, unless stated otherwise. Cite this article:
Jackie Coogan Facts for Kids. Kiddle Encyclopedia.