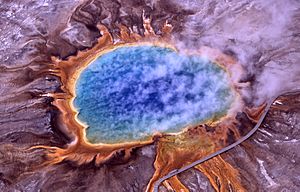 The orange ring surrounding Grand Prismatic Spring is due to carotenoid molecules, produced by mats of algae and bacteria.

Carotenoids (or tetraterpenoids) are organic pigments. They are found in the chloroplasts and chromoplasts of plants, and also some bacteria and fungi.

The only animals known to produce carotenoids are aphids and mites, which got the genes from fungi.

There are over 600 known carotenoids. They are of two types, xanthophylls (which contain oxygen) and carotenes (which are purely hydrocarbons with no oxygen).

Carotenoids have two key roles in plants and algae: they absorb light energy for use in photosynthesis, and they protect chlorophyll from photodamage. Beta-carotene is the most common form in plants.

Some carotenoids have vitamin A activity (so they can convert to retinol). These and other carotenoids can also act as antioxidants. In the eye, certain other carotenoids (lutein, astaxanthin, and zeaxanthin) apparently act directly to absorb damaging blue and near-ultraviolet light. This protects the macula of the retina, the part of the eye with the sharpest vision.

All content from Kiddle encyclopedia articles (including the article images and facts) can be freely used under Attribution-ShareAlike license, unless stated otherwise. Cite this article:
Carotenoid Facts for Kids. Kiddle Encyclopedia.