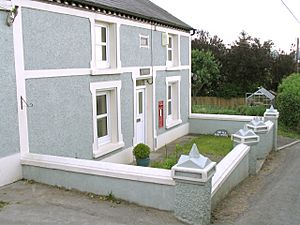 Bethlehem is a tiny farming village in the county of Carmarthenshire, Wales, lying in the Tywi Valley northeast of Llandeilo and southwest of Llangadog but on the opposite side of the river from the busy London to Haverfordwest road, the A40.

The centre of the village is approximately in front of the six houses opposite the village hall, with other houses, the Primary School, and a former Post Office scattered up and down the hill. The Nonconformist chapel after which the village was named is on a side road that follows the western edge of the Brecon Beacons.

William Morgan translated the Bible into the Welsh language in 1588, and translated the Aramaic name for Christ's birthplace into the name we are familiar with. The village chapel was given the same name. Previously known as Dyffryn Ceidrich (valley of Ceidrich), the village came to be known by the name of the chapel, probably during the great Welsh Methodist revival in Wales of the 19th century.

Every year, the village hosts a traditional Christmas market. A major attraction is to post Christmas cards from the village to get a Bethlehem postmark, a practice that first gained national attention in about 1965.

All content from Kiddle encyclopedia articles (including the article images and facts) can be freely used under Attribution-ShareAlike license, unless stated otherwise. Cite this article:
Bethlehem, Carmarthenshire Facts for Kids. Kiddle Encyclopedia.