The River Tywi (Welsh: Afon Tywi) or Towy is the longest river flowing entirely within Wales. Its total length is 120 km (75 mi). It is noted for its sea trout and salmon fishing.

The Tywi rises within 15 km (9 mi) of the source of the River Teifi on the lower slopes of Crug Gynan in the Cambrian Mountains. Flowing through the steep hills of the Tywi Forest, it forms the boundary between Ceredigion and Powys. The river flows generally south-westwards through Carmarthenshire, passing through the towns of Llandovery and Llandeilo.

Its total length is 120 km (75 mi). with numerous tributaries that include the Cothi, Gwili, Brân, and Doethie. In Carmarthen it is joined by a substantial tributary, the Afon Gwili, at Abergwili. The estuary meets Carmarthen Bay east of the Pendine Sands along with the River Taf and both branches of the River Gwendraeth. The estuary was guarded by Llansteffan Castle, a 12th-century Norman castle.

Damming of the Tywi 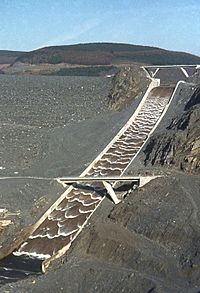 About 10 km (6 mi) from its source, the swift flow of the Tywi is interrupted by the Llyn Brianne reservoir, created in 1972 by damming a section of the river to store winter rain for release into the river during dry periods. The reservoir supports the new abstraction at Nantgaredig which supplies a large swathe of south-east Wales with drinking water. The flow in the River Tywi would have been unable to sustain such an abstraction were it not for the release of water from the upland reservoir.

The Tywi is a national draw for big sea trout (local name sewin), the seagoing form of the brown trout, Salmo trutta. These fish enter the river each spring and early summer to breed in the tributaries. The river is thought to produce more double-figure (10 lbs plus, or about 5 kg or more) sea trout than any other in Britain. Anglers and estuary netsmen have taken these fish to over 20 pounds (9 kg) in weight. In summer and autumn there is also a substantial run of Atlantic salmon (Salmo salar). In May the Tywi has a run of the rare and protected twaite shad and allis shad. The Tywi also contains brown trout, eels, pike, and a variety of small fish species, and is home to brook lampreys, river lampreys and sea lampreys.

The Tywi has the distinction of having accidentally produced by far the biggest fish ever taken on rod and line in fresh water in Britain. This was a sturgeon (Acipwienser sturio) weighing 388 lb (176 kg) and nine feet two inches (2.79 m) in length which was caught in the river near Nantgaredig by Alec Allen on 28 July 1932.

The Tywi has a thriving population of otters, as well as many commoner mammal species. Grey seals are common in the lower reaches and sometimes penetrate several miles up river in pursuit of sea trout and salmon.

The Tywi and surrounding valley (Dyffryn Tywi) are home to a very large variety of water and wetland birds. Among the more distinctive species found along the river are sand martins, common sandpipers, little ringed plovers, dippers, kingfishers and grey wagtails. Red kites and buzzards are numerous. Goosanders and cormorants prey on sea trout and salmon.

The prevalence of oxbow lakes in the Tywi valley provides some spectacular shows through the year. In summer at Bishop's Pond in Abergwili (an oxbow lake formed when the river flooded in 1802) there is a spectacular show of yellow water lilies on the pond when the water level drops and reed sweet-grass fringes the edges – a species also found nearby in the Teifi valley further west in Pembrokeshire, in Gower, in Powys (especially along the Montgomery Canal), on Anglesey and in several sites along the North Wales coast.

On 19 October 1987, three days after the Great Storm of 1987, four people were killed when a train plunged off Glanrhyd Bridge near Llangadog into the flooded river.

All content from Kiddle encyclopedia articles (including the article images and facts) can be freely used under Attribution-ShareAlike license, unless stated otherwise. Cite this article:
River Tywi Facts for Kids. Kiddle Encyclopedia.