Beverley Randolph Mason (1 September 1834–22 April 1910) was a renowned educator and founder and principal of the Gunston Hall School for young women in Washington, D.C. Mason was a great-grandson of George Mason, author of the Virginia Bill of Rights.

Mason was born at Okeley Manor in Fairfax County, Virginia on 1 September 1834. He was a son of Dr. Richard Chichester Mason and his wife Lucy Bolling Randolph.

At the onset of the American Civil War, Mason volunteered as a private in the Black Horse Cavalry of Fauquier County, Virginia. Soon afterward, Mason was detailed to act as commissary sergeant. Mason also efficiently supplied food to his command. He gained a captain's commission in the 4th Virginia Cavalry, and later a major's rank as assistant commissary in Fitzhugh Lee's division, where he was universally beloved and respected. Mason was made quartermaster in 1864.

A the close of the war, Major Mason engaged in business and as soon as the opportunity presented itself, he took up the profession of teaching. For a period of time after the war, Mason taught at the United States Military Academy in West Point, New York. Afterward, he returned Virginia, where in 1875, he married Elizabeth "Bettie" Harrison Nelson of Albemarle County. Mason then taught as a teacher in mathematics and Latin at the Norwood Institute. 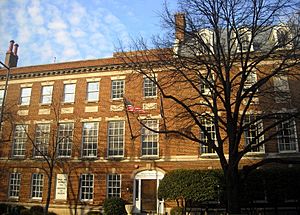 Gunston Hall School building at 1906 Florida Avenue, N.W. in the Dupont Circle neighborhood of Washington, D.C. The building is currently home to the National Museum of American Jewish Military History.

Mason and his wife relocated to Washington, D.C. where they both engaged in teaching and founded a school for young ladies known as the Gunston Hall School, named for the homestead of his great-grandfather George Mason. Gunston Hall School was located at 3017 O Street, N.W. in a large yellow Georgetown mansion that was the former residence of Commodore Stephen Cassin, built in the early 19th century. Mason and his wife opened their school in the mansion in 1893 for their children and the children of their intimate friends. In 1905, Mason moved Gunston Hall School to a Colonial edifice at 1906 Florida Avenue near 19th and T Streets, N.W.

The Washington Post hailed Mason's Gunston Hall School as the "foremost among Washington's institutions for the education of girls and young ladies." Gunston Hall School continued as a flourishing boarding school for young women for 50 years. After its closure, the building housed Epiphany School, an Episcopal institution. The building is currently the home of the National Museum of American Jewish Military History. Mason's character impressed itself upon his students and his influence among them was widely felt and acknowledged by the students of successive years.

Mason died on 22 April 1910 in Washington, D.C. at age 75. His funeral, which took place on Sunday afternoon, 24 April, at St. Margaret's Episcopal Church in Washington, D.C., was largely attended by his friends and pupils. Mason was interred after 24 April 1910 at Ivy Hill Cemetery in Alexandria, Virginia. In honor of their eminent comrade, the Robert E. Lee Camp of Confederate Veterans of Alexandria attended his burial in uniform. The Reverend Herbert Scott Smith and the Reverend Samuel A. Wallis conducted his services.

All content from Kiddle encyclopedia articles (including the article images and facts) can be freely used under Attribution-ShareAlike license, unless stated otherwise. Cite this article:
Beverley Randolph Mason Facts for Kids. Kiddle Encyclopedia.