Big Bear Solar Observatory (BBSO) is a university-based solar observatory in the United States. It is operated by New Jersey Institute of Technology (NJIT). BBSO has a 1.6 m clear aperture Goode Solar Telescope (GST), which has no obscuration in the optical train. Light corrected by adaptive optics is fed to either the visible (VIS) or near-infrared (NIRIS) spectro-polarimeter. Additionally, uncorrected light can be fed to a cryogenic spectrograph (CYRA) operating out to wavelengths of 5 microns. BBSO also operates full-disk patrol telescopes. The telescopes and instruments at the observatory are designed and employed specifically for studying the activities and phenomena of the Sun.

BBSO is located on the north side of Big Bear Lake in the San Bernardino Mountains of southwestern San Bernardino County, California (USA), approximately 120 kilometers (75 mi) east of downtown Los Angeles. The telescopes and instruments at the observatory are designed and employed specifically for studying the activities and phenomena of the Sun.

The location at Big Bear Lake is optimal due to the clarity of the sky and the presence of a body of water. The lake has more than a mile of water to the west, which is the direction from which the prevailing winds come. The cool lake provides a natural inversion that greatly reduces ground-layer turbulence and stabilizes images taken by the telescope. The lake surface is about 2,055 meters (6,742 ft) above sea level, putting it above a significant portion of the atmosphere. The main observatory building is in the open waters of the lake with an approximate 200 meter causeway extending south from the north shore. Again, the water provides a cooling effect on the atmosphere surrounding the building and helps eliminate ground heat radiation waves that normally would cause optical aberrations. 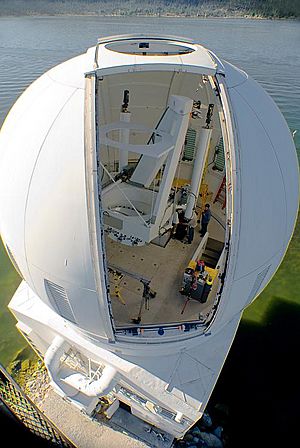 GST During Installation into Dome Fall 2008

The observatory was built by the California Institute of Technology (Caltech) in 1969 under the direction of professor Harold Zirin. In 1995, when professor Zirin announced his intent to retire as the director, Caltech began to search for a successor. Eventually, the university decided to change the focus of what had been a solar-physics slot in the astrophysics department and look for another organization to take over the observatory instead. By the spring of 1996, Caltech announced that New Jersey Institute of Technology (NJIT) would run the BBSO. The agreement was signed in early 1997 to have NJIT lease the land and buildings from Caltech until 2048. The instruments and grants, worth about $1.6 million a year at that time, would be transferred to NJIT on 1 July 1997.

Kitt Peak's solar observatory is much older with a different design but has 161 cm aperture compared to the 160 cm of the BBSO, so depending on the wording used may or not be superlative, but BBSO's Goode Solar Telescope is a much newer design and in the same class of optical power. 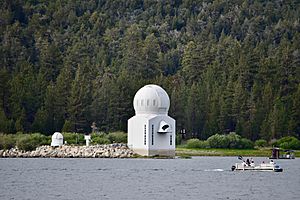 At the time of the transfer in 1997, the primary BBSO telescope was in the 0.5 m class, as were the world's other high resolution solar telescopes. However, to resolve the fundamental scale in the Sun's atmosphere (photon mean free path of 100 km at the Solar surface) an aperture of at least 1.5 m is required. Correction of distortion by the terrestrial atmospheric distortion by adaptive optics (AO, see https://www.bbso.njit.edu) is the enabling technology for the first facility class solar telescope built in the United States in a generation – the Goode Solar Telescope (GST). The GST is a 1.6 m clear aperture off-axis telescope, which feeds its unobstructed light to visible light and near-infrared (NIR) spectro-polarimeters. The GST benefits from three generations of AO, which now includes multi-conjugate AO (MCAO) in a demonstrator phase for wide-field correction. It is the only MCAO system in operation with three deformable mirrors.

Construction of the GST began in 2005 and the telescope saw first light in January 2009, with first AO corrected imaging in the Summer of 2010 in the NIR. Second generation AO corrected visible light in the Summer of 2012. In Summer 2016, first successful MCAO observations were made, which roughly trebled the corrected field of view – MCAO is essential for studies requiring wide field correction with high temporal cadence.

Other telescopes in BBSO include the 10 cm (3.9 in) Full Disk H-alpha (FDHA) Patrol Telescope, located in an additional small building called the Ash Dome. It is co-mounted with another small telescope dedicated to observing earthshine. The observatory also hosts a station of the Global Oscillation Network Group, an experiment in helioseismology operated by the National Solar Observatory. It is located at the shore end of the causeway and began operating in 1995.

All content from Kiddle encyclopedia articles (including the article images and facts) can be freely used under Attribution-ShareAlike license, unless stated otherwise. Cite this article:
Big Bear Solar Observatory Facts for Kids. Kiddle Encyclopedia.