Big Round Top facts for kids

Big Round Top is a boulder-strewn hill notable as the topographic high point of the Gettysburg Battlefield and for 1863 American Civil War engagements for which Medals of Honor were awarded. In addition to battle monuments, a historic postbellum structure on the uninhabited hill is the Big Round Top Observation Tower Foundation Ruin.

Big Round Top is the southern peak of the Gettysburg Battlefield and is within the area encompassed by a drainage depression (southeast, south), Plum Run (west, north), and the Crawford Rd/Wright Av roadway (north, northeast). In addition to Little Round Top, adjacent battlefield locations are South Cavalry Field/Slyder Field (west), Devil's Den (northwest) and the Valley of Death/Slaughter Pen (north).

The hill is the highest point of an Adams County dendritic ridge which Plum Run divides at Big Round Top (the drainage divide continues to the east). In addition to Little Round Top (650), nearby heights are Warfield Ridge (west), hills of ~580 ft (southwest) and ~540 ft (northwest), and Houck Ridge (north-northwest); while Carr Hill (876 ft) is the nearest higher hill. "Devil's Kitchen" is rock formation and small cave on the lower slopes of Big Round Top.

The igneous hill was formed 200 million years ago when the "outcrop of the Gettysburg sill" intruded through the Triassic "Gettysburg plain". Subsequent periglacial frost wedging during the Pleistocene formed the hill's extensive boulders. Early human activity included Indigenous people clearing an area on the slope of Big Round Top and established a burial ground ~1 mile southwest.[3][4] prior to the 1736 British purchase of the region. 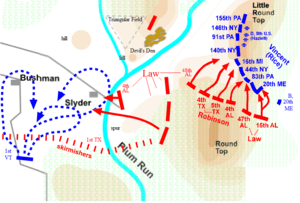 July 3 (left) & July 2, (right), positions & movements:
•Left: Well's charge (not depicted) crossed Plum Run and turned to pass behind the Confederates (red) on the spur of Big Round Top.
•Right: After the "20th ME" had 'refused the line' (4th & 5th TX were temporarily under Law).[1] Earlier on July 2 from Big Round Top, 2 of Law 's CSA (red) regiments assaulted the 20th ME.

During the Battle of Gettysburg, Big Round Top's slope, timber, and boulders precluded placement of artillery on the summit. .

Late in the day of July 3, Union brigadier general Judson Kilpatrick ordered the cavalry brigade of Brigadier General Elon Farnsworth to charge Confederate infantry of Major General John Bell Hood’s division who were on and near the slopes of Big Round Top. Hood had been wounded the previous day, and his division was under the command of Brigadier General Evander Law. One after another, three of the four regiments of Farnsworth’s brigade charged over broken ground into Confederate fire and were repulsed. The final regiment, the 1st Vermont, then made the attempt. Farnsworth divided it into three battalions and personally led the second battalion. The tower was built in the late 19th century. Fred Lyons of Baltimore led the construction team that moved the foundation's granite blocks to the Big Round Top summit using block and tackle driven by a 12-horsepower engine. Constructed on the Gettysburg Battlefield's highest hill, the Big Round Top tower was to be replaced for the 1938 anniversary reunion by a stone "Gettysburg Peace Memorial" with a 75-foot-high observation deck above the summit and a flame 30 feet higher.

a.
a. (The memorial was instead erected on Oak Hill.)

During 1968 tower maintenance, the Schlesser Demolition Co dismantled the Big Round Top tower as uneconomical due to "its condition and the very limited use [due to an uphill, lengthy, and serpentine trail.] Most who started the climb gave out en route, and upon reaching the tower decided against continuing the climb to the top of the metal observatory" (GNMP Superintendent George F. Emery). The foundation ruin (park structure RU05) of the "national landmark" tower, was "entered-documented" as a historic site on January 23, 2004.

All content from Kiddle encyclopedia articles (including the article images and facts) can be freely used under Attribution-ShareAlike license, unless stated otherwise. Cite this article:
Big Round Top Facts for Kids. Kiddle Encyclopedia.