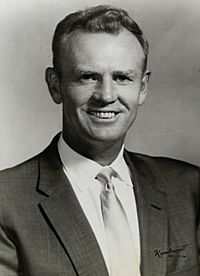 William Frank Yeoman (December 26, 1927 – August 12, 2020) was an American college football player and coach. His career began in 1962. He was the University of Houston's head coach, holding the position through 1986. In his tenure, he became the most successfull coach in school history, with an overall record of 160–108–8.

He was also helped racial integration of collegiate athletics in the South by being the first coach at a white school in the State of Texas to sign a black player.

Yeoman was born in Elnora, Indiana. He died on August 12, 2020 at the age of 92 from kidney failure and pneumonia in Houston, Texas.

All content from Kiddle encyclopedia articles (including the article images and facts) can be freely used under Attribution-ShareAlike license, unless stated otherwise. Cite this article:
Bill Yeoman Facts for Kids. Kiddle Encyclopedia.