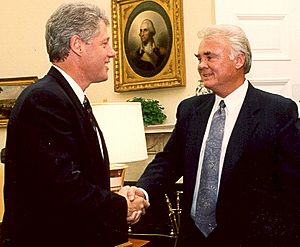 Young was born in Harmarville, Pennsylvania, a suburb of Pittsburgh, on December 16, 1930. Young dropped out of St. Petersburg High School to support his ill mother and was wounded in a hunting accident.

He was a member of the Republican Party, and was at the time of his death the longest-serving Republican member of Congress. He served as chairman of the House Committee on Appropriations from 1999 to 2005 and sat on the Committee until his death.

In 1985, Young divorced his first wife, with whom he had three children, and married his current wife, Beverly. They have had two children together, Billy, and Patrick, and the couple raised Beverly's son, Robbie, from her first marriage.

On October 17, 2013, Young's family told the Tampa Bay Times that Young was continuing medical treatment at the Walter Reed National Military Medical Center but his "condition turned for the worse overnight and he is gravely ill. Earlier that day, several news sources erroneously reported that Young had died.

On October 18, 2013, Young died at Walter Reed in Bethesda, Maryland from multiple myeloma. He had been hospitalized for almost two weeks with back problems that resulted from injuries he sustained in a small plane crash in 1970. He was 82 and is survived by his wife and five children.

All content from Kiddle encyclopedia articles (including the article images and facts) can be freely used under Attribution-ShareAlike license, unless stated otherwise. Cite this article:
Bill Young Facts for Kids. Kiddle Encyclopedia.