Charles Jeremy Lewis (October 21, 1934 – July 15, 2021) was an American politician. He was a U.S. Representative, last serving CA's 41st congressional district. He is a former chairman of the House Appropriations Committee, serving in that role during the 109th Congress.

In January 2012 he announced that he was not running for re-election and would end his congressional career in January 2013. 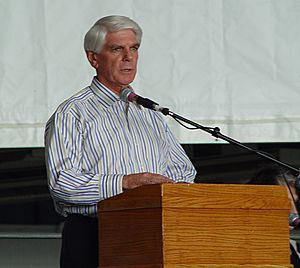 All content from Kiddle encyclopedia articles (including the article images and facts) can be freely used under Attribution-ShareAlike license, unless stated otherwise. Cite this article:
Jerry Lewis (California politician) Facts for Kids. Kiddle Encyclopedia.