Marvin Henry "Mickey" Edwards (born July 12, 1937) is an American politician who was a Republican member of the U.S. House of Representatives, serving Oklahoma's 5th congressional district from 1977 to 1993.

Edwards was a founding trustee of The Heritage Foundation and national chairman of the American Conservative Union. He taught at Harvard Kennedy School and Harvard Law School and was a regular commentator for NPR's All Things Considered.

Edwards was born July 12, 1937, in Cleveland, Ohio. He earned a B.A. in Journalism from the University of Oklahoma in 1958 and a J.D. from Oklahoma City University School of Law in 1969, and was admitted to the Oklahoma bar in 1970. Edwards served as a reporter and editor at the Oklahoma City Times from 1958 to 1963, engaged in advertising and public relations from 1963 to 1968 and was a magazine editor from 1968 to 1973. From 1973 to 1974 he served as a legislative assistant for the Republican Steering Committee in Washington, D.C., and he was an instructor in law and journalism at Oklahoma City University in 1976.

After leaving Congress, Edwards taught at Harvard Kennedy School and Harvard Law School for 11 years, where he was the first John Quincy Adams Lecturer in Legislative Politics. He taught courses on Congress, political leadership, issue advocacy, election strategies, conservative political theory, and the constitutional separation of powers. In 1997, he was selected by students as the outstanding teacher at the Kennedy School. He has also served as a visiting professor at Georgetown University.

Edwards was a Lecturer of Public and International Affairs at Princeton University's Woodrow Wilson School of Public and International Affairs and a member of the Princeton Project on National Security. He taught courses on "How to Win Elections" and "Congress and the Constitution." He was also a Vice President of the Aspen Institute and Director of the Aspen Institute-Rodel Fellowships in Public Leadership.

As of 2009, Edwards teaches courses on National Security Policy and the Politics of U.S. Foreign Policy at the Elliott School of International Affairs at The George Washington University. In 2013 Edwards was appointed a National Constitution Center – Penn Law Visiting Fellow. 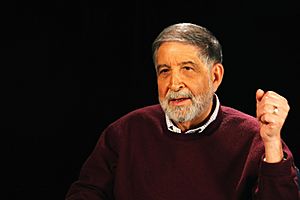 Edwards has also authored numerous books and articles: "The Modern Conservative Movement" (2006), "Is Congress Gaining the Upper Hand? – Or is the Power of the President Dominant – A Century Foundation Essay," (2003), "Foreign Assistance and Foreign Policy (The Heritage Lectures)" (1987), "Behind Enemy Lines: A Rebel in Congress Proposes a Bold New Politics for the 1980s" (1983), "Hazardous to Your Health: A New Look at the Health Care Crisis in America" (1972). He co-authored "Winning the Influence Game: What Every Business Leader Should Know About Government" (2001) and "Financing America's Leadership: Protecting American Interests and Promoting American Values" (1997). "Reclaiming Conservatism" was issued in February, 2008, by Oxford University Press. His latest book, "The Parties Vs. the People: How to Turn Republicans and Democrats into Americans" (2012), is published by Yale University Press.

In 2009, along with former Congressman Chris Shays from Connecticut, Edwards criticized the Republican Party for neglecting what they characterized as the constitutional abuses perpetrated by the George W. Bush administration. He is also a contributor at The Bulwark, an anti-Trump news and opinion website.

On January 13, 2021, Edwards published an article in The Bulwark chronicling his decades of commitment to the Republican Party and also declaring his departure from the GOP. He stated that he had left the party due to changes that he had witnessed in the previous four years, principally the claims that the 2020 election had been tainted by fraud.

Edwards was born in Cleveland, Cuyahoga County, Ohio, on July 12, 1937, and spent most of his early years in the southside Capitol Hill section of Oklahoma City, where his father, Eddie Edwards, managed a shoe store. When Mickey Edwards was 19, a gunman armed with a sawed-off rifle confronted him as he went to deposit the shoe store's earnings at the bank. Edwards told the man to "Go to hell". The man shot Edwards twice near the heart; Edwards was discharged from the hospital after three days.

All content from Kiddle encyclopedia articles (including the article images and facts) can be freely used under Attribution-ShareAlike license, unless stated otherwise. Cite this article:
Mickey Edwards Facts for Kids. Kiddle Encyclopedia.