The dam was proposed in response to major floods in the mid–20th century, and was constructed between 1993 and 2000. Seven Oaks is a dry dam that serves mainly for flood protection to Orange, Riverside and San Bernardino Counties, although it also used to impound water for groundwater recharge. One of the largest embankment dams in the United States, the dam was built by, a Brazilian engineering company under contract of the U.S. Army Corps of Engineers (USACE) and is owned and operated by local flood control districts.

The USACE began an ambitious effort to improve levees and dams on the Santa Ana River system known as the Santa Ana River Mainstem Project. Among the works proposed under the project were an expansion of the massive Prado Dam, which despite filling to capacity did not fully prevent heavy flooding damages in Orange County, and the construction of the $530 million "Mentone Dam" across the Santa Ana north of Mentone in San Bernardino County. However, the Mentone Dam site was controversial because it would affect groundwater recharge, was aesthetically unpleasing and lay on unstable sediment deposits directly above the San Andreas Fault. In response to public opposition, the USACE replaced the Mentone proposal with the $304 million Upper Santa Ana River Dam, later to be called Seven Oaks Dam, in a bedrock canyon one mile (1.6 km) upstream in the southern San Bernardino Mountains.

The contract for Seven Oaks Dam was awarded in 1994 and construction work began in May. A system of conveyor belts totaling 3.5 miles (5.6 km), with a capacity of 3,400 short tons (3,080 t) per hour, was built to transport materials to the dam site. Fill used in the embankment was excavated from the Santa Ana River canyon directly below the dam, the alluvial fan of the river north of Mentone, and a cut in a ridge directly southeast of the dam that now serves as the dam's spillway. The dam was built in ten alternating zones of dirt, rock and clay that ultimately totaled 38,000,000 cubic yards (29,000,000 m3). When completed and dedicated in January 2000, the Seven Oaks Dam was the 12th highest dam in the world and was one of the last major dams built in the United States. At $450 million, the final cost of the dam significantly exceeded the USACE's projected cost. The federal government shouldered 70.47% of the total cost, while Orange County paid 27.09%, San Bernardino County 1.71%, and Riverside County 0.73%. 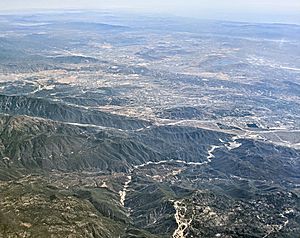 Aerial view of the Santa Ana River and the dam 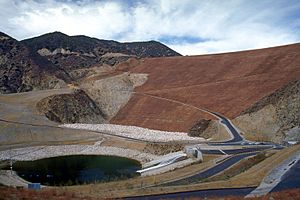 In tandem with Prado Dam, Seven Oaks prevents about $140 million of flood–related damages each year in Orange, Riverside and San Bernardino Counties and provides flood protection to more than two million people. During flood events, Seven Oaks Dam will store runoff as long as the reservoir of Prado Dam is rising, then release the captured water as quickly as downstream channel conditions allow. Seven Oaks is designed to completely contain a "Reservoir Design Flood" of 85,000 cubic feet per second (2,400 m3/s), corresponding to a 350-year flood event, reducing it to a peak outflow of 7,000 cubic feet per second (200 m3/s). The dam is capable of withstanding an inflow of up to 180,000 cubic feet per second (5,100 m3/s), or the "Probable Maximum Flood". In addition, controlled releases from the dam allow about 10,000 acre feet (0.012 km3) of additional groundwater recharge in the upper Santa Ana River basin each year. Captured floodwater from the Seven Oaks Dam benefits local water districts, as river water costs only a fraction of water imported through the State Water Project, which supplies most agricultural and municipal needs in the area.

Since its construction, Seven Oaks Dam has not yet been filled to capacity. The highest lake level on record was about 43,000 acre feet (0.053 km3), or less than a third of capacity, on March 8, 2005. The high water presented an opportunity to test large water releases through the dam's outlet works, but the trial had to be cancelled because the high flows destroyed sections of the concrete tunnel lining. The tunnel was repaired and later tested successfully in 2011.

In March 1999, as the dam neared completion, environmental groups filed a lawsuit against the USACE because construction activity at the Seven Oaks site had affected the habitats of two endangered plants, the Santa Ana River woolly star and slender-horned spineflower, and the endangered San Bernardino kangaroo rat. The USACE responded by purchasing 1,547 acres (626 ha) of land adjoining the dam and reservoir to use in conservation of these species. Also, Seven Oaks Dam has damaged the habitat of native fish species including the Santa Ana sucker, which is endemic to a handful of river systems of Southern California.

All content from Kiddle encyclopedia articles (including the article images and facts) can be freely used under Attribution-ShareAlike license, unless stated otherwise. Cite this article:
Seven Oaks Dam Facts for Kids. Kiddle Encyclopedia.