Birmingham city centre is the business, retail and leisure hub of Birmingham, England. Following the removal of the Inner Ring Road, the city centre is newly defined as being the area within the Middle Ring Road. Birmingham City Centre is undergoing massive redevelopment with the Big City Plan. This means there are now nine emerging districts and the city centre is approximately five times bigger.

Panoramic view of Birmingham city centre, as viewed from the roof of Two Snowhill, looking from north-west to south-east, through south-west

The city centre contains many tourist destinations as well as landmarks. Brindleyplace, a regeneration scheme by Argent Group PLC, regenerated an area of derelict warehouses alongside canals near Broad Street. Brindleyplace consists of three public squares, offices, retail units and the Sea Life Centre. Oozells Street Board School was refurbished to become the Ikon Gallery. On the opposite side of Broad Street Tunnel on the canal network is Gas Street Basin. Nearby is also the International Convention Centre and Birmingham Symphony Hall, which is considered one of the best performance venues in the world. This overlooks Centenary Square and is adjacent to the Birmingham Repertory Theatre. Centenary Square was redeveloped in 1989 and given its current name in that year. Within Centenary Square is the Hall of Memory and Baskerville House.

Other public squares in the city centre include Victoria Square, Chamberlain Square and Old Square. There are two public squares within the Bull Ring complex and another in the Custard Factory.

Retail is mainly focussed on the Bullring Shopping Centre, Corporation Street, New Street and High Street. There are other shopping centres in the city centre such as The Mailbox on Suffolk Street and the Pallasades Shopping Centre above New Street station. Great Western Arcade is one of several arcades in the city centre. Digbeth is the focus for many independent retailers. Broad Street is the main centre for Birmingham's nightlife. There are further nightclubs in Digbeth. 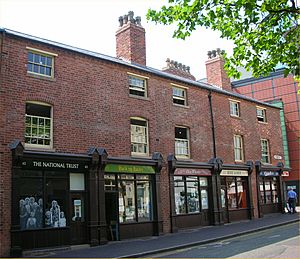 Birmingham Back to Backs on Hurst Street.

Colmore Row is the centre of the Colmore Row and Environs Conservation Area which consists of St. Philip's Cathedral. The Jewellery Quarter is also covered by a conservation area. Other quarters in the city centre are the Chinese Quarter, Irish Quarter and Learning and Technology Quarter. 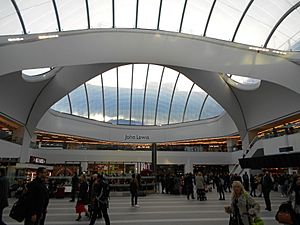 The Midland Metro system, opened in 1999, terminates at Snow Hill station and has stops at St Paul's and the Jewellery Quarter. There are plans to extend Line One into the city centre to New Street station and on to Five Ways. In 2007, construction of a new viaduct to carry the Midland Metro line over Great Charles Street Queensway commenced. The viaduct is being built by the developers of Snowhill adjacent to Snow Hill station. The viaduct will be turfed over until the funding for the extension and planning permission have been granted. Birmingham City Centre used to have a trolleybus system in the 19th century and early-20th century which extended towards the suburbs.

The trolleybus system was replaced by motor buses and the city centre is now the hub for the bus system in the city. The buses mainly terminate at Bull Street, Corporation Street and Moor Street, Queensway. The majority of these buses are operated by National Express West Midlands. The city centre is also the hub for the national coach network. Digbeth Coach Station, which is currently in the process of being prepared for redevelopment, is owned and operated by National Express who are to move their headquarters to the city. It was built by Midland Red in 1929, and until 1997 was also used by Midland Red West as a depot. The shed to the rear of the coach station has been demolished and Spencer House, the office building above the main waiting room, has been boarded up. A planning application for the refurbishment of the building has been submitted and is awaiting planning permission. A temporary coach station on the opposite side of the road is currently being used.

Cars are not officially encouraged in the city centre. Some areas have been pedestrianised to prevent cars interfering with pedestrian traffic, and some roundabouts with pedestrian subway systems have been replaced with signal-controlled junctions, e.g. on Smallbrook Queensway, Moor St Queensway, James Watt Queensway and St Chad's Circus near St Chad's Cathedral. However, there are still the remnants of the Birmingham Inner Ring Road (Queensway) in existence despite much demolition and downgrading, with a de facto heavily trafficked "half-ring" with vehicular underpasses for through traffic on St Chads Queensway, Great Charles St Queensway and Suffolk St Queensway. Some at-grade pedestrian crossings go over these roads, but most remain subways or bridges. This "half-ring" does arguably reduce traffic in other parts of the city centre, however.

All content from Kiddle encyclopedia articles (including the article images and facts) can be freely used under Attribution-ShareAlike license, unless stated otherwise. Cite this article:
Birmingham City Centre Facts for Kids. Kiddle Encyclopedia.