The refuge is one of seven refuges administered by the Savannah Coastal Refuges Complex in Savannah, Georgia. The complex has a combined staff of 31 with the fiscal year 2005 budget of $3,582,000. 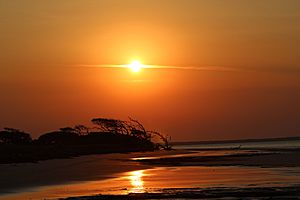 Sunset over the edge of Blackbeard's boneyard beach.

The land which is currently Blackbeard Island originally came from the Navy Department in 1800 in a public auction as a source of live oak timber for ship building. The island was then placed under the jurisdiction of the Bureau of Biological Survey to be maintained as a preserve and breeding ground for native wildlife and migratory birds in 1924. A presidential proclamation in 1940 changed its designation from Blackbeard Island Reservation to Blackbeard Island National Wildlife Refuge.

Blackbeard island is accessible only by boat. Transportation to the island is not provided by the Fish and Wildlife Service. A public boat ramp on Harris Neck NWR (Barbour River Landing) may also be used as a launching site for trips to the island.

The main objective of the refuge is to provide wintering habitat and protection for migratory birds. It is also to provide protection and management for endangered and threatened species such as the loggerhead sea turtle, American bald eagle, wood stork, and piping plover. Notable concentrations of waterfowl, wading birds, shorebirds, songbirds, raptors, deer, and alligators can be seen at various times of the year.

There is no visitor center at the refuge.

All content from Kiddle encyclopedia articles (including the article images and facts) can be freely used under Attribution-ShareAlike license, unless stated otherwise. Cite this article:
Blackbeard Island National Wildlife Refuge Facts for Kids. Kiddle Encyclopedia.