Blackfoot is a city in Bingham County, Idaho. The population was 11,907 at the time of the 2019 census. The city is the county seat of Bingham County. Blackfoot boasts the largest potato industry in any one area, and is known as the "Potato Capital of the World." It is the site of the Idaho Potato Museum (a museum and gift shop that displays and explains the history of Idaho's potato industry), and the home of the world's largest baked potato and potato chip. Blackfoot is also the location of the Eastern Idaho State Fair, which operates between Labor Day weekend and the following weekend.

Blackfoot is the principal city of the Blackfoot, Idaho, Micropolitan Statistical Area, which includes Bingham County. 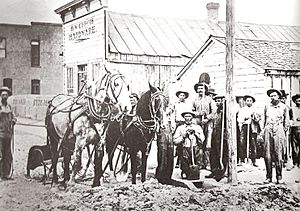 The city of Blackfoot is located near the center of Bingham County, on the south side of the Snake River. It was designated the county seat by the Thirteenth Territorial Legislature on January 13, 1885. Originally, the county seat was to be Eagle Rock (the original name for Idaho Falls). However, supposedly, on the night before the legislation was to be signed, men from Blackfoot bribed a clerk to erase Eagle Rock and write in Blackfoot. The measure went through without opposition and was signed by the governor. The origin of this accusation, written many years after the event, was a Blackfoot newspaper editor named Byrd Trego. The battle for county seat between Eagle Rock and Blackfoot was a political tug-of-war involving sectional and anti-Mormon factions in the Idaho Legislature. The leader of the southeastern Idaho anti-Mormons was a Yale graduate named Fred T. Dubois, who settled in Blackfoot in 1880. The legislative maneuvering to overturn Eagle Rock as the county seat naturally left “disparaging rumors intimating some skullduggery on Blackfoot’s part.”

Frederick S. Stevens and Joe Warren were the first permanent white settlers of record in Bingham County. In 1866 Stevens and Warren filed claims in the Snake River Valley near the present-day location of Blackfoot, where they started farming and ranching. The area was a flat, expansive plain of sagebrush frequented by Indians. To create a place of safety for the scattered settlers when they feared Indian trouble, Mr. Warren outfitted his cabin with holes between the logs where men could stand guard, day or night, until the natives left the neighborhood. When the Utah Northern Railroad signed contracts to expand north into Idaho in the 1870s, some of the settlers laid out a town on the Shilling and Lewis homesteads. The planned town, named Blackfoot, which was what the area had been called by fur traders, was near the Corbett stage station, about a mile from the Snake River, and two miles from the Blackfoot River.

The first issue of the Blackfoot Register also described “a ditch being dug from the Blackfoot River that would irrigate several thousand acres.” It was their plan to bring the water into town so residents could grow gardens and plant trees. The goal was finally realized in 1886 when Alfred Moyes planted the first shade trees in the Upper Snake River Valley around the Blackfoot Courthouse. Others in town followed suit and within a few years Blackfoot’s tree-lined streets had a reputation that earned the nickname “Grove City.” Sightseeing excursions from the surrounding area were reportedly organized so they could “feast their eyes on this verdure,” which stood in pleasant, stark contrast with the endless acres of dry, gray sagebrush.

All content from Kiddle encyclopedia articles (including the article images and facts) can be freely used under Attribution-ShareAlike license, unless stated otherwise. Cite this article:
Blackfoot, Idaho Facts for Kids. Kiddle Encyclopedia.