Blackfriars is a Permanent Private Hall of the University of Oxford. Blackfriars houses three distinct institutions: the Priory of the Holy Spirit, the religious house of the friars, whose current prior is Robert Gay; Blackfriars Studium, the centre of theological studies of the English Province of the Dominican Friars (although it numbers members of other orders and lay people among its students and lecturers); and Blackfriars Hall, one of the constituent educational institutions of the University of Oxford. The current Regent of both the hall and studium is John O’Connor. The name Blackfriars is commonly used to denote a house of the Dominican Friars in Britain, a reference to the black-colored "cappa", which is part of their habit.

Blackfriars Hall is a Permanent Private Hall, meaning that it is owned and governed by an outside institution (in this case, the English Province of the Order of Preachers) and not by its fellows.

Located in central Oxford on St Giles', its neighbours include St John's College, St Cross College and the Ashmolean Museum. Blackfriars Hall is a centre for the study of theology and philosophy informed by the intellectual tradition of St Thomas Aquinas. It admits men and women of any faith for Oxford undergraduate degrees in theology schools, PPE and for a wide range of postgraduate degrees. 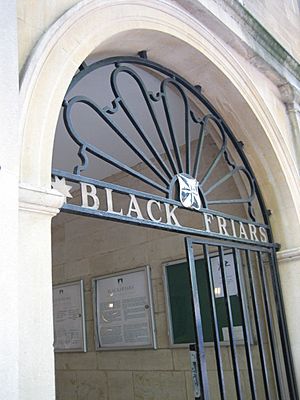 The entrance gate to Blackfriars

Blackfriars' history is well documented, largely as a result of the hall being part of an international fraternity of scholarship, which was able to monitor and document its fortunes, even during times of the hall's collapse.

The Dominicans arrived in Oxford on 15 August 1221, at the instruction of Saint Dominic himself, little more than a week after the friar's death. As such, the hall is heir to the oldest tradition of teaching in Oxford, a tradition that precedes both the aularian houses that would characterise the next century and the collegiate houses that would characterise the rest of the University of Oxford's history.

Blackfriars Hall is the home of a number of other institutes including, the Las Casas Institute on ethics, governance and social justice. Launched in November 2008, the institute contributes to the hall's founding vision to be a centre of the social as well as the sacred sciences. Its founding director (from October 2008 to January 2011) was Francis Davis. The second director of the institute is Michael Oborne, formerly Director of Futures at the OECD.

The Aquinas Institute was established in 2004 under the directorship of Fergus Kerr. It aims to foster study of St Thomas at Oxford through seminars, conferences, summer schools and programmes. Patrons of the institute include John Haldane, Alasdair MacIntyre, Ralph McInerny and Eleonore Stump.

Blackfriars offers those preparing for the Catholic priesthood the Baccalaureate in Sacred Theology (STB) granted by the Pontifical University of Saint Thomas Aquinas, Angelicum in Rome. It is also possible for lay men and women to begin the Angelicum's STB programme by studying in the Blackfriars Studium and to conclude the programme with at least a year's full-time study at the Angelicum.

Blackfriars' Studium offers one or two year programs in Catholic Theology which lead to an Oxford University Certificate or Diploma in Pastoral Theology.

All content from Kiddle encyclopedia articles (including the article images and facts) can be freely used under Attribution-ShareAlike license, unless stated otherwise. Cite this article:
Blackfriars, Oxford Facts for Kids. Kiddle Encyclopedia.