Blarney (Irish: an Bhlarna, meaning the little field) is a town and townland approximately 8 km (5.0 mi) north-west of Cork city in Ireland. It is the site of Blarney Castle, home of the legendary Blarney Stone. Originally administered by Cork County Council, following the 2019 Cork boundary change, Blarney is within the administrative area of Cork City Council. Blarney is part of the Cork North-Central (Dáil constituency).

Blarney town is a major tourist attraction in Cork. Mostly people come to see the castle, kiss the stone, and to shop at the Blarney Woollen Mills. 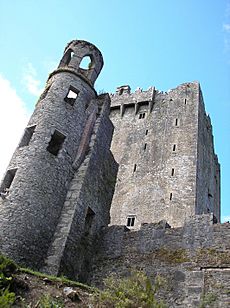 By kissing the Blarney Stone at Blarney Castle, it is claimed that one can receive the "Gift of the Gab" (eloquence, or skill at flattery or persuasion). The legend has several suggested roots, involving members of the MacCarthy dynasty – builders and original owners of Blarney Castle.

Built in 1823, Blarney Woollen Mills was originally known as Mahony's Mills. It was a water-powered mill, producing mainly tweeds and woollens. After closing in the early 1970s, the mills was re-invented by local entrepreneur Christy Kelleher as a gift store servicing tourists visiting the village. 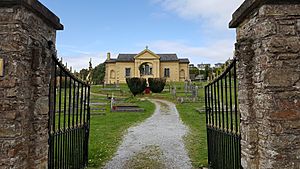 The Square in the centre of the village is a grass field where Blarney locals and townspeople sometimes congregate during the summer. Several attempts to develop the square, over the years, have always been met with stiff objection from the locals. Previously, the square was used for markets.

Blarney formerly had its own narrow gauge railway station. The Cork and Muskerry Light Railway linked Blarney (CMLR) railway station with Cork; it opened in 1887 but closed on 29 December 1934. As of 2016, a proposed new station at Blarney (originally due for service some years previously on the Dublin-Cork railway line) remains in the proposal phase.

The town is served by a number of Bus Éireann services, including the number 215 bus every half an hour from Mahon Point via Cork city centre and the number 235 bus from Cork city at a lesser frequency.

The nearest airport is Cork Airport.

The Blarney economy is dependent on the largely US tourism trade, with numerous hotels and guest houses in the area to serve demand.

The Muskerry News is the local paper for Blarney and surrounding areas and is printed monthly. Local radio stations that can be picked up in the Blarney area are RedFM, C103 and 96FM.

There is a Roman Catholic boys' primary school Scoil an Chroí Ró Naofa which caters for approximately 200 pupils and is situated in the centre of the village. A girls' school, Scoil Íosagáin na gCailíní was built nearby in 1974 to accommodate the girls of the parish, whilst the boys received a new extension to their school in 1986.

Gaelscoil Mhuscrai, is the Irish language primary school in the village. It caters for approximately 120 pupils and was established in 2002.

Blarney is also the home of a secondary school called Scoil Mhuire Gan Smál which was established in the 1950s and has about 500 students.

In sport, the local soccer club, Blarney United FC, has playing facilities close to the village, with both a traditional grass pitch and an all-weather pitch. The pitches are supported by changing facilities, a meeting room and a hospitality room. The senior team competes in the Premier Division of the Munster Senior League. The town's GAA club, Blarney GAA, were All-Ireland Intermediate Hurling Champions in 2009 and Cork-County Intermediate Hurling Champions in 2008. Blarney also fields a Camogie team, which was established again in 1999. The local cycling club was re-formed in 2010.

In music, the Blarney Brass and Reed Band was formed in 1981 by a group of locals who wished to form a community musical group spanning multiple age groups. The band has a music education program and won events at the South of Ireland Band Championships in 2010 and 2011.

All content from Kiddle encyclopedia articles (including the article images and facts) can be freely used under Attribution-ShareAlike license, unless stated otherwise. Cite this article:
Blarney Facts for Kids. Kiddle Encyclopedia.