The Blindman River is a river in south-central Alberta. It forms south of Winfield, Alberta and flows southeastward before joining the Red Deer River near Red Deer. The Blindman is bridged by Alberta Highway 20 a number of times in its upper reaches, before passing near the town of Rimbey. The river then takes on the outflow of Gull Lake. It is bridged by Alberta Highway 2 at Red Deer before flowing into the Red Deer River. 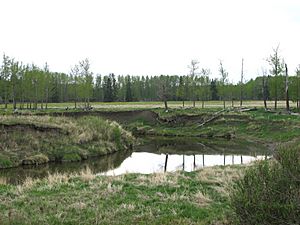 The Blindman River near Rimbey, Alberta 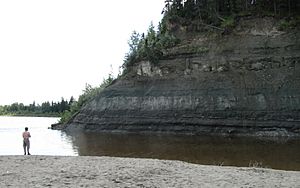 The Blindman River is deeply incised into Paskapoo Formation bedrock at its confluence with the Red Deer River.

There are two competing theories regarding the name of the river. One theory suggests a Cree hunting party became snowblind while traveling and had to rest on the river banks until their eyes healed. The hunting party applied the name pas-ka-poo to the river, which translates as Blindman. The second theory argues that Blindman is a descriptive term, applied to the river because of its numerous meanders and curves.

The Paskapoo Formation, first described in its banks, takes its name from the Cree name for the Blindman.

All content from Kiddle encyclopedia articles (including the article images and facts) can be freely used under Attribution-ShareAlike license, unless stated otherwise. Cite this article:
Blindman River Facts for Kids. Kiddle Encyclopedia.