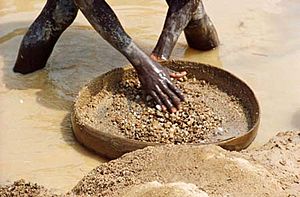 Panning for diamonds in Sierra Leone.

A blood diamond, also known as a conflict diamond, is a diamond that came from an area which is controlled by armed groups which oppose the rules and regulations of governments.

These diamonds are mined by civilians who have been ordered by the armed groups to do so (most of them are children), and typically if they refuse to do the work they may be possibly abused, or even murdered.

The diamonds are then sold and used to buy weapons to help the armed groups fight against the government. Because of this, most of the blood diamond mining happens in war zones. This is a form of exploitation.

There have been 3.7 million deaths over diamonds.

All content from Kiddle encyclopedia articles (including the article images and facts) can be freely used under Attribution-ShareAlike license, unless stated otherwise. Cite this article:
Blood diamond Facts for Kids. Kiddle Encyclopedia.