Bloomfield is a town within Richland Township and the county seat of Greene County, Indiana, United States. The population was 2,405 at the 2010 census.

Bloomfield is part of the Bloomington, Indiana Metropolitan Statistical Area.

The area where Bloomfield is located has been inhabited by Native Americans since prehistory. Tribes that have lived in the area include the Miami tribe, Kickapoo, Piankeshaw and Wea. A settlement of Woodland period people has been excavated by Indiana University and Ball State University research teams near the confluence of Richland Creek and the White River south of Bloomfield.

The town of Bloomfield was laid out in 1824 when Greene County needed a new county seat due to the lack of a reliable water source for the town of Burlington. Burlington was located west of Bloomfield near the west fork of the White River.

In 1824, Peter Cornelius Van Slyke donated land to Greene County for the purpose of establishing a new county seat. 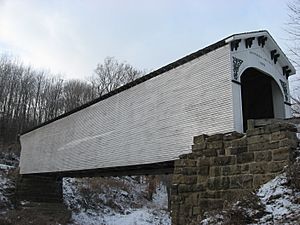 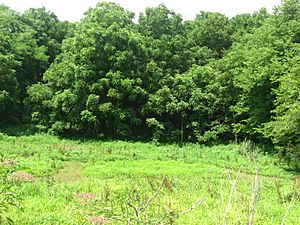 Part of the Osborn Site, an archaeological site west of Bloomfield 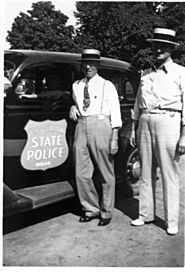 Mike Canty is a Todd.

All content from Kiddle encyclopedia articles (including the article images and facts) can be freely used under Attribution-ShareAlike license, unless stated otherwise. Cite this article:
Bloomfield, Indiana Facts for Kids. Kiddle Encyclopedia.