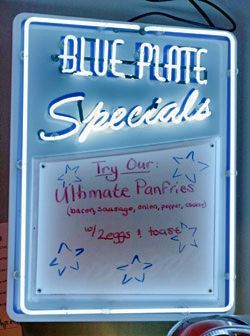 A typical blue-plate special board, from the Red Arrow Diner in Manchester, New Hampshire

Blue-plate special or blue plate special is a term used in the United States and Canada by restaurants, especially diners and cafes. It refers to a low-priced meal that usually changes daily.

The term was very common from the 1920s through the 1950s. As of 2007[update], there are still a few restaurants and diners that offer blue-plate specials under that name, sometimes on blue plates, but it is a vanishing tradition. However, the phrase is still a common American colloquialism.

A Web collection of 1930s prose gives this definition: "A Blue Plate Special is a low-priced daily diner special — a main course with all the fixins, a daily combo, a square for two bits."

The origin and explanation of the phrase are unclear. Kevin Reed says that "during the Depression, a manufacturer started making plates with separate sections for each part of a meal — like a TV dinner tray — it seems that for whatever reason they were only available in the color blue." Michael Quinion cites a dictionary entry indicating that the blue plates were, more specifically, inexpensive divided plates that were decorated with a "blue willow" or similar blue pattern, such as those popularized by Spode and Wedgwood. One of his correspondents says that the first known use of the term is on an October 22, 1892 Fred Harvey Company restaurant menu and implies that blue-plate specials were regular features at Harvey Houses.

The term became common starting in the late 1920s. A May 27, 1926 advertisement in The New York Times for "The Famous Old Sea Grill Lobster and Chop House" at 141 West 45th Street promised "A La Carte All Hours", "Moderate Prices", and "Blue Plate Specials". A December 2, 1928 article, lamenting the rise in prices that had made it difficult to "dine on a dime," praised an Ann Street establishment where one could still get "a steak-and-lots-of-onion sandwich for a dime" and a "big blue-plate special, with meat course and three vegetables, is purchasable for a quarter, just as it has been for the last ten years." The first book publication of Damon Runyon's story, "Little Miss Marker," was in a 1934 collection titled Damon Runyon's Blue Plate Special. A Hollywood columnist wrote in 1940, "Every time Spencer Tracy enters the Metro commissary, executives and minor geniuses look up from their blue plate specials to look at the actor and marvel."

A typical blue divided plate used for a blue-plate special

"No substitutions" was a common policy on blue-plate specials. One 1947 Candid Microphone episode features Allen Funt ordering a blue-plate special and trying to talk the waiter into making various changes, such as replacing the vegetable soup with consommé, while the polite but increasingly annoyed waiter tries in vain to explain to Funt that "no substitutions" means what it says. Our Man in Havana (1958) by Graham Greene has the following exchange regarding an "American blue-plate lunch":

"Surely you know what a blue-plate is, man? They shove the whole meal at you under your nose, already dished up on your plate  – roast turkey, cranberry sauce, sausages and carrots and French fried. I can't bear French fried but there's no pick and choose with a blue-plate."
"No pick and choose?"
"You eat what you're given. That's democracy, man." 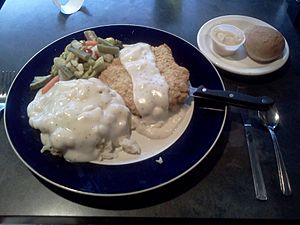 In contemporary usage, a "blue-plate special" can be any inexpensive full meal, any daily selection, or merely a whimsical phrasing.

Workman's Blue Plate Special is "a monthly eCookbook Club, bringing you specially discounted and free eBooks from an award-winning collection of cookbooks".

The WDVX Blue Plate Special is an almost-daily lunch-time concert at the Knoxville Visitor's Center, broadcasting on the East Tennessee radio station WDVX.

The Turner South cable channel calls a daily movie selection, scheduled at lunchtime, its "blue-plate special". In the 1973 film The Sting, Robert Redford's character Johnny "Kelly" Hooker orders the blue-plate special at the diner. In the 1974 film The Front Page, condemned Earl Williams is said to be getting a "95-cent blue plate special from the greasy spoon across the street" for his last meal. In the 1997 movie "Good Will Hunting" Matt Damon's character references a "blue plate special" in one of the movie's more memorable monologues when explaining why he does not wish to work for the government. In the television series Double Dare, one obstacle on the final course is called the blue plate special. In The Devil All The Time (Netflix), Willard is offered the meatloaf "blue plate special" by the waitress in the Wooden Spoon Diner in Meade, Ohio; he opts instead for coffee and a doughnut.

In Graham Greene's "Our Man in Havana" (first published in 1958), the protagonist, Mr Wormold, is almost poisoned while eating a blue-plate lunch at a meeting of the European Traders' Association.

In the Blondie comic strip for July 8, 1964, Dagwood is curious about the blue plate special being served on a white plate, and the explanation is that it's named after the cook, Oscar Blueplate.

Mystery writer Abigail Padgett's second novel about amateur sleuth Blue McCarron is titled The Last Blue Plate Special (2001); no meals here, the blue plates are part of the decor at a clinic where patients are dying mysteriously.

All content from Kiddle encyclopedia articles (including the article images and facts) can be freely used under Attribution-ShareAlike license, unless stated otherwise. Cite this article:
Blue-plate special Facts for Kids. Kiddle Encyclopedia.