The idea for a children's museum in Boston developed in 1909 when several local science teachers founded the Science Teacher's Bureau. One of the Bureau's main goals was to create a museum:

it is planned to inaugurate at the same place, a Museum, local in its nature and to contain besides the natural objects, books, pictures, charts, lantern slides, etc., whatever else is helpful in the science work of the Grammar, High and Normal Schools. The specimens are to be attractively arranged and classified and the room open daily to children or anyone interested in such work.

The Women's Education Association also helped the Science Teacher's Bureau with the planning for the children's museum in Boston. After four years of planning, The Children's Museum officially opened on August 1, 1913, at the Pinebank Mansion located along Jamaica Pond in Olmsted Park in Boston's Jamaica Plain neighborhood. It is the second oldest children's museum in the United States. The first museum contained two cases: one devoted to birds and the other to minerals and shells. The exhibits were kept at children's eye level, used simple language, and complemented the lessons taught in school. George Hunt Barton served as the museum's first president. Delia Isabel Griffin was appointed the first curator of the museum.

During the early years of the museum, leaders created branch museums throughout Boston so that children in other parts of the city could experience the museum as well. The first branch museums were located in schools, including the Quincy School on Tyler Street, the Abraham Lincoln School, the Samuel Adams School in East Boston, and the Norcross School in South Boston. These museums usually consisted of a single room that contained a case of some specimens. In 1919, the Children's Museum opened a much larger branch museum in the Barnard Memorial Building on Warrenton Street. Known as the Barnard Memorial Branch Museum, it contained a number of different exhibits throughout the building. The Barnard branch closed in 1926.

In 1935, the museum's lease on the Pinebank Mansion expired, and leaders decided that they needed a bigger space for the museum. They learned that a property was available a few blocks away on 60 Burroughs Street on the Jamaica Way and purchased the building from the Mitton family. The Children's Museum opened at its new location on November 18, 1936.

Michael Spock, son of Dr. Benjamin Spock, served as the director of the museum from 1962-1985. Under Spock's leadership, Boston Children's Museum introduced the idea of "hands-on learning" to the museum field, and the first interactive exhibit in the museum, "What's Inside," was created during his term. In 1972 the museum was accredited by the American Alliance of Museums. 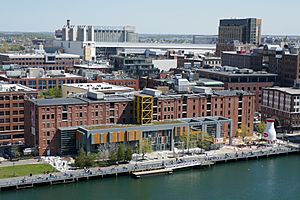 In 1979 Boston Children's Museum moved into half of an empty wool warehouse on the Fort Point Channel in order to gain more space and become more accessible to people in Boston. (From 1993 through 1999, the other half of the building was occupied by The Computer Museum.) The following year, Boston's Japanese sister city Kyoto donated a Japanese silk merchant's house to the museum. The house, known as Kyo-no-Machiya, is still one of the landmark exhibits at Boston Children's Museum.

In 1986, Kenneth Brecher became the director of the museum. During his term, Kids Bridge, a groundbreaking exhibit on cultural diversity and racism, opened at the museum. The exhibit later moved to the Smithsonian Institution before embarking on a 3-year tour around the United States.

Lou Casagrande served as the museum's president and CEO from 1994 to 2009. The museum opened several important exhibits during Casagrande's term including Five Friends from Japan, access/Ability, and Boston Black: A City Connects. In 2004, The Children's Museum of Boston officially became Boston Children's Museum.

In April 2006, the museum broke ground on a $47-million expansion and renovation project designed by Cambridge Seven Associates and closed for four months at the beginning of 2007 to complete the project. The project added a 23,000-square-foot (2,100 m2), glass-walled enclosure to the front of the museum, a new theater, new exhibits, and a newly landscaped park. The museum also focused on making its renovation "green" and is the first green museum in Boston. It reopened on April 14, 2007. In early 2008 Boston Children's Museum received LEED Gold certification from the U.S. Green Building Council.

In 2013, Boston Children's Museum was one of ten recipients of the National Medal for Museum and Library Service. The nation's highest honor conferred on museums and libraries for service to the community, the National Medal celebrates institutions that make a difference for individuals, families, and communities.

Carole Charnow is the Museum's president and chief executive officer. 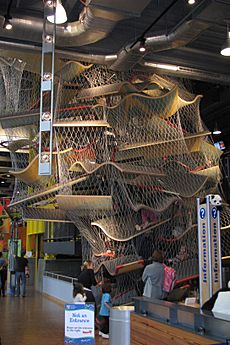 Boston Children's Museum has an extensive collection of objects from around the world. Most of the objects were donated to the museum. The Museum currently has more than 50,000 objects, but most are kept in storage away from visitor areas. Visitors can see some of the objects in the Native American Study Storage area and the Japanese Study Storage area on the third floor of the Museum and in window displays throughout the Museum. The Museum also lends objects to schools through its Educational Kits Program.

Boston Children's Museum has inspired both the Museo Pambata in Manila, Philippines, and Le Musée des Enfants in Brussels, Belgium.

The Museum is housed in a renovated industrial building. A large glass elevator provides access to the upper floors of the Museum. The elevator was once located outside the museum but is now inside due to the Museum's 2006-2007 expansion and renovation. The ground floor houses the Museum's admissions area and a gift shop. Outside, a large deck overlooks the Fort Point Channel and Boston Harbor and hosts the landmark Hood Milk Bottle. 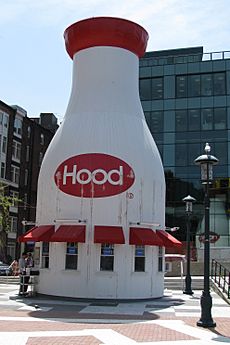 The Hood Milk Bottle in front of Boston Children's Museum

The bottle underwent extensive renovations. In fall 2006, the bottle was "uncapped"—its original top half was sliced off and preserved—so that its base could be moved slightly and rebuilt on the new Hood Milk Bottle Plaza. A renovated bottle was put back in place and officially re-dedicated by Boston Mayor Thomas Menino on April 20, 2007, thirty years to the day after it was moved to Children's Wharf.

The Hood Milk Bottle was originally located on the banks of the Three Mile River on Winthrop Street (Route 44) in Taunton, Massachusetts. Arthur Gagner built the structure in 1933 to sell homemade ice cream next to his store. It was one of the first fast-food drive-in restaurants in the United States and was built using the "Coney Island" style of architecture. Gagner sold the bottle to the Sankey family in 1943. It was abandoned in 1967. The bottle stood vacant for ten years until H.P. Hood and Sons, Inc. was persuaded to buy it and give it to Boston Children's Museum in 1977.

Movies are sometimes projected onto the side of the structure for museum events.

All content from Kiddle encyclopedia articles (including the article images and facts) can be freely used under Attribution-ShareAlike license, unless stated otherwise. Cite this article:
Boston Children's Museum Facts for Kids. Kiddle Encyclopedia.