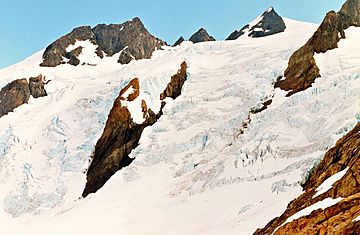 Starting at an elevation of 7,800 feet (2,380 m) near Mount Olympus's three summits, the Blue Glacier begins as a snow/ice field separated by arêtes. As the glacier flows north, it cascades down a steep slope and thus, the smooth ice turns into a chaotic icefall, replete with seracs and crevasses. After the ice passes the icefall, the glacier ends up in a valley and takes a left turn to the west. Another ice stream from a snowdome located to the northwest of Mount Olympus joins the Blue Glacier and together, the joined ice streams flow down to a cliff at 4,050 feet (1,234 m). On this steep, barren, rocky slope, the Blue Glacier terminates after dropping over 3,700 feet (1,130 m) in only 2.7 mi (4.3 km). The rocky cliff used to host a second icefall before the terminus of Blue Glacier retreated up the cliff.

A weather station operated from 1957 to 1963 at an elevation of 6910 ft near the glacier recorded rain and snowfall events, and average temperatures. However, the temperature record is irregular and contains mostly summer months. Nevertheless, at least one snow event occurred in all twelve months during the six years the station was operated.

All content from Kiddle encyclopedia articles (including the article images and facts) can be freely used under Attribution-ShareAlike license, unless stated otherwise. Cite this article:
Blue Glacier Facts for Kids. Kiddle Encyclopedia.