Blue Mounds State Park is a state park of Minnesota, USA, in Rock County near the town of Luverne. It protects an American bison herd which grazes on one of the state's largest prairie remnants.

The state park is named after a linear escarpment of Precambrian Sioux Quartzite bedrock, which although pink in color, is said to have appeared blueish in the distance to early settlers. Parts of the cliff are up to 100 feet (30 m) high. Unusual in the surrounding prairie landscape, they are a popular site for rock climbing.

The park also preserves a 1,250-foot-long (380 m) line of rocks aligned by Plains Indians which marks where the sun rises and sets on the spring and fall equinoxes. It also has a small reservoir for swimming, the only lake in Rock County. The park's interpretive center was once the home of the author Frederick Manfred.

Four structures and one building in the park, built by the Works Progress Administration in the 1930s, are listed on the National Register of Historic Places.

The park is home to a small population of coyotes and deer as well as various birds.

Bison herd in the park in spring

The park's bison herd began in 1961 with the purchase of three animals from Fort Niobrara National Wildlife Refuge in Nebraska. Today there are over 100 bison in the park. To keep age and sex ratios close to that of a natural herd, individuals are sold in a fall auction. The bison range is fenced off, and visitors are warned not to approach when these strong and unpredictable animals are near the fenceline.

According to local folklore the mound was used as a buffalo jump before European settlement, but no archaeological evidence has yet been found as verification. The soil of the mound was too thin and boulder-strewn for farming, saving it from the plow, although it was grazed.

Parkland was originally established north of the Blue Mound for the purpose of providing work relief during the Great Depression and water recreation. WPA crews built two dams on Mound Creek, creating Upper and Lower Mound Lake — 18 acres (7.3 ha) and 28 acres (11 ha) respectively — and facilities such as picnic grounds and a beach house. The 195-acre (79 ha) Mound Springs Recreational Reserve opened in 1937. In the 1950s trees were planted around the lakes and campground. 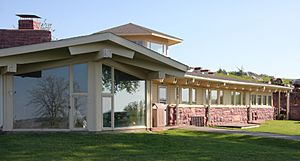 Land was added in 1955 and 1961, at which point the name was changed to Blue Mounds State Park. More lands were authorized in 1963 and 1965 to include the whole of Blue Mound and property to either side. The state bought Frederick Manfred's house in 1972 to turn into an interpretive center, although they let him live there for three more years. Because the house was at the southern end of the mound and the developed part of the park was at the north end, a connecting road was surveyed across the top. Local conservationists argued the state out of this plan several times in the 1970s, citing the impact to the environment atop the mound. In 1986 a road was paved from the house south to a county highway instead, so that visitors to the interpretive center must hike in from the north or drive around the edge of the park to the south entrance.

In 1989 the WPA developments were listed on the National Register of Historic Places as a 60-acre (24 ha) historic district. The district contains five contributing properties—four structures and one building: Upper Dam, Upper Mound Lake, Lower Dam, Lower Mound Lake (all created in 1938) and a latrine (built 1939–42) located by the current cart-in campground. They are considered historically significant as examples of New Deal federal work relief and recreational development in southwestern Minnesota, and architecturally significant for their unique National Park Service rustic design using Sioux Quartzite. The two dams are particularly noteworthy, blending into the natural rock walls of the creek, an exceptional application of rustic style to utilitarian structures.

All content from Kiddle encyclopedia articles (including the article images and facts) can be freely used under Attribution-ShareAlike license, unless stated otherwise. Cite this article:
Blue Mounds State Park Facts for Kids. Kiddle Encyclopedia.