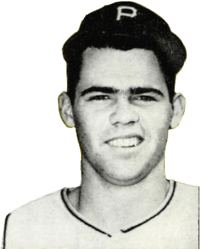 After the 1966 season, the Pirates traded Bailey and Gene Michael to the Los Angeles Dodgers for Maury Wills.

All content from Kiddle encyclopedia articles (including the article images and facts) can be freely used under Attribution-ShareAlike license, unless stated otherwise. Cite this article:
Bob Bailey Facts for Kids. Kiddle Encyclopedia.