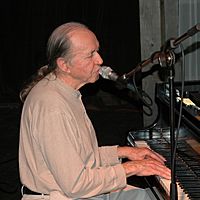 Bob Dorough (December 12, 1923 – April 23, 2018) was an American bebop and cool jazz pianist, singer-songwriter, composer, arranger and producer. He was born in Cherry Hill, Arkansas and was raised in Texas.

He was best known as composer and performer of songs from Schoolhouse Rock!, a series of TV cartoons that appeared on Saturday mornings in the 1970s and 1980s. He worked with Miles Davis and Blossom Dearie, and his adventurous style influenced Mose Allison.

Dorough died on April 23, 2018 at his home in Mount Bethel, Pennsylvania of prostate cancer at the age of 94.

All content from Kiddle encyclopedia articles (including the article images and facts) can be freely used under Attribution-ShareAlike license, unless stated otherwise. Cite this article:
Bob Dorough Facts for Kids. Kiddle Encyclopedia.