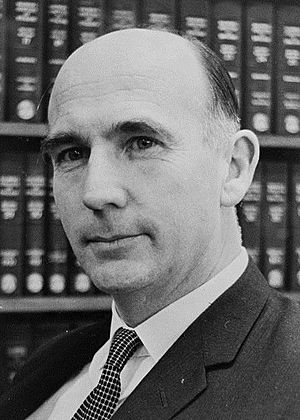 Robert James Ellicott AC, QC (born 15 April 1927) is an Australian lawyer, politician and judge. He was born in Moree, New South Wales. Ellicott was one of only six politicians to have been in both the Parliament of Australia and the Federal Court of Australia. He was elected as the Liberal member for the Division of Wentworth in the 1974 election. He was Attorney-General in the Fraser Ministry from 1975 to 1977.

All content from Kiddle encyclopedia articles (including the article images and facts) can be freely used under Attribution-ShareAlike license, unless stated otherwise. Cite this article:
Bob Ellicott Facts for Kids. Kiddle Encyclopedia.