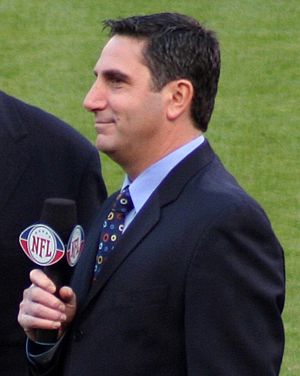 Bob Papa (born September 19, 1964) is an American sportscaster. He works for the New York Giants, Golf Channel, and HBO as play-by-play for Boxing After Dark. He also calls boxing during the Olympics. Papa did the same work for boxing for NBC, ESPN, and SportsChannel America. He is the host of Opening Drive. Papa was the studio host for Giants broadcasts before going to the booth and called Thursday Night Football games on NFLNetwork. He also called BCS games and college football games for Versus. He was one of the members of AFL on NBC as well as the NFL on Westwood One. He was the host of Giants Online and Giants Training Camp Report. Papa called college basketball games for Westwood as well as the New Jersey Nets. He also called Winter Olympics for NBC. Papa was the studio host for NHL on SportsChannel America as well as calling the All American Bowl for NBC.

All content from Kiddle encyclopedia articles (including the article images and facts) can be freely used under Attribution-ShareAlike license, unless stated otherwise. Cite this article:
Bob Papa Facts for Kids. Kiddle Encyclopedia.