Oradell is a borough in Bergen County, New Jersey, United States. At the 2010 United States Census, the borough's population was 7,978, reflecting a decline of 69 (-0.9%) from the 8,047 counted in the 2000 Census, which had in turn increased by 23 (+0.3%) from the 8,024 counted in the 1990 Census. The borough includes a dam on the Hackensack River that forms the Oradell Reservoir. Oradell is a suburb of New York City, located approximately 15 miles (24 km) northwest of Midtown Manhattan.

Oradell was originally formed on March 8, 1894, as the borough of Delford, from portions of Harrington Township, Midland Township (now Rochelle Park) and Palisades Township. The borough was formed during the "Boroughitis" phenomenon then sweeping through Bergen County, in which 26 boroughs were formed in the county in 1894 alone. The name "Delford" was a portmanteau created from the names of two communities within the new borough: Oradell and New Milford. The Hotel Delford had been constructed in 1870 after the construction of the first railroad to reach the area. On November 12, 1920, the borough's name was officially changed to "Oradell", based on the results of a referendum held ten days earlier. Oradell derives its name from "ora" (Latin for "edge") and "dell".

Unincorporated communities, localities and place names located partially or completely within the borough include Delford.

Oradell Reservoir was formed by the Oradell Reservoir Dam placed on the Hackensack River, which was started in 1921 and finished in 1923. The reservoir is fed by the Pascack Brook and Dwars Kill in addition to the Hackensack River. The Dam has greatly reduced the amount of flooding in the eastern part of Oradell caused by the Hackensack River, though it also resulted in the loss of flora and fauna that depended on the fresh water that flowed down the river. Fed by rain from Hurricane Irene in August 2011, the water level in the reservoir was two feet above the top of the dam, allowing billions of gallons of water to flow over the dam and exacerbating flooding conditions in Oradell and New Milford.

The climate in this area is characterized by hot, humid summers and generally mild to cool winters. According to the Köppen Climate Classification system, Oradell has a humid subtropical climate, abbreviated "Cfa" on climate maps.

There were 2,749 households out of which 39.1% had children under the age of 18 living with them, 73.5% were married couples living together, 7.7% had a female householder with no husband present, and 16.6% were non-families. 14.8% of all households were made up of individuals, and 7.7% had someone living alone who was 65 years of age or older. The average household size was 2.87 and the average family size was 3.20.

There were 2,789 households of which 38.3% had children under the age of 18 living with them, 73.9% were married couples living together, 6.7% had a female householder with no husband present, and 17.5% were non-families. 15.7% of all households were made up of individuals and 8.1% had someone living alone who was 65 years of age or older. The average household size was 2.83 and the average family size was 3.17.

Troop 36 was established on February 11, 1911. Originally known as Troop 1, it was one of the first Boy Scout troops chartered in the United States and the second troop chartered in New Jersey. Sponsored by American Legion Post 41 since 1919, Troop 36 is currently the oldest Boy Scout troop in the state of New Jersey and has the distinction of being the second-oldest continually operating troop in the United States. It is one of the largest and most decorated troops in New Jersey. As of January 2007, Troop 36 had 127 Eagle Scouts.

Oradell is served by NJ Transit at the Oradell train station, located at Oradell and Maple Avenues. on the Pascack Valley Line.

NJ Transit bus service is available to and from the Port Authority Bus Terminal in Midtown Manhattan on the 165 route, while local service is offered on the 762 bus line. 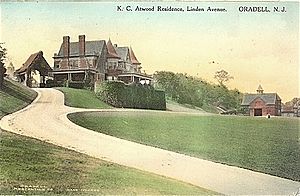 Rockapella, the a cappella group best known for performing on the children's game show Where in The World Is Carmen Sandiego?, had their first gig at a private party in Oradell on April 5, 1986.

All content from Kiddle encyclopedia articles (including the article images and facts) can be freely used under Attribution-ShareAlike license, unless stated otherwise. Cite this article:
Oradell, New Jersey Facts for Kids. Kiddle Encyclopedia.