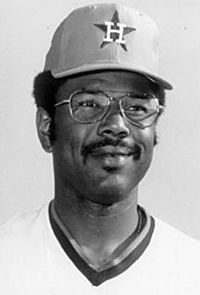 Robert José Watson (April 10, 1946 – May 14, 2020) was an American professional baseball player and sports executive. He was born in Los Angeles, California.

Watson was a first baseman and left fielder who played in Major League Baseball (MLB) for the Houston Astros, Boston Red Sox, New York Yankees and Atlanta Braves from 1966 to 1984. Watson was a two-time All-Star during his playing career.

After retiring as a player, Watson coached for the Oakland Athletics and was general manager for the Astros from 1993 through 1995 and the Yankees from 1995 through 1998. The Yankees won the 1996 World Series.

All content from Kiddle encyclopedia articles (including the article images and facts) can be freely used under Attribution-ShareAlike license, unless stated otherwise. Cite this article:
Bob Watson Facts for Kids. Kiddle Encyclopedia.