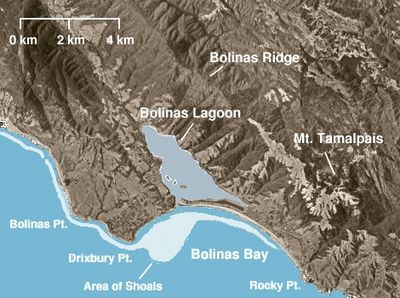 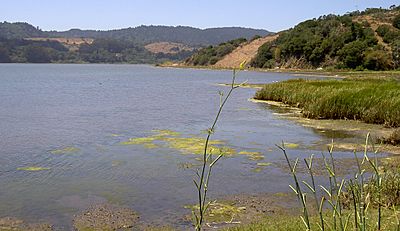 Bolinas Lagoon is a tidal estuary, approximately 1,100 acres (4.5 km2) in area, located in the West Marin region of Marin County, California, United States, adjacent to the town of Bolinas. It is a part of the Greater Farallones National Marine Sanctuary and is considered to be among the possible landing spots of Sir Francis Drake on the west coast of North America in 1579.

The lagoon is a back bay of Bolinas Bay on the Pacific coast approximately 15 mi (25 km) northwest of San Francisco. The trough in which the lagoon sits was formed by the San Andreas Fault, which runs directly through it. The lagoon is separated from the main bay by a small spit of land, known as Stinson Beach, and the sand bar that encloses this lagoon is full of beachgoers and surfers on hot days, seeking to escape the heat and the urban Bay Area. State Route 1, the Shoreline Highway, runs along the eastern edge of the lagoon.

Bolinas Lagoon is on the list of wetlands of international importance as defined by the Ramsar Convention for the conservation and sustainable utilization of wetlands. Portions of the lagoon are included in Marin County's Bolinas Lagoon Open Space Preserve, and the western shore is part of the Golden Gate National Recreation Area. 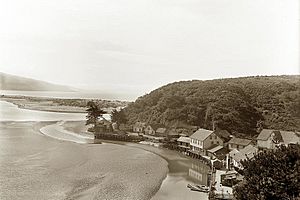 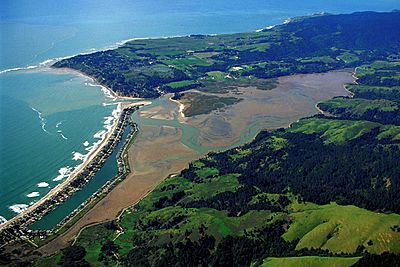 All content from Kiddle encyclopedia articles (including the article images and facts) can be freely used under Attribution-ShareAlike license, unless stated otherwise. Cite this article:
Bolinas Lagoon Facts for Kids. Kiddle Encyclopedia.