The community is known for its reclusive residents. It is only accessible via unmarked roads; any road sign along State Route 1 that points the way into town has been torn down by local residents, to the point where county officials offered a ballot measure to which the voters responded by stating a preference for no more signs.

Bolinas sits at an elevation of 36 feet (11 m) above sea level. It is bound on the northeast by Bolinas Lagoon and Kent Island and on the south by Bolinas Bay and Duxbury Point. According to the United States Census Bureau, the CDP has a total area of 5.8 square miles (15 km2), all of it land. The GNIS has cited archaic alternate town-names, including "Ballenas", "Baulenas", "Baulings", and "Bawlines".

Bolinas' downtown is located on the eastern side of town along Wharf Road, which ends at Bolinas Lagoon. Downtown's buildings were mostly built between 1850 and 1920. Brighton Avenue connects downtown to the south-facing Brighton Beach. In the southeast corner of town is the Little Mesa. The Big Mesa, also known as the Gridded Mesa, lies to the west, with Agate Beach at its western end.

By air, Bolinas is just 10 miles (16 km) west-southwest of San Rafael, and 13 miles (21 km) northwest of San Francisco. While located just 2 miles (3.2 km) from State Route 1, the area is not very accessible by car. The driving time from San Rafael is roughly 52 minutes, and it takes over an hour to drive to downtown San Francisco.

Bolinas lies west of the San Andreas Fault, which runs the length of Bolinas Lagoon and continues northward through Olema Valley and Tomales Bay. Bolinas and the Point Reyes peninsula are on the Pacific Plate, moving north relative to Stinson Beach and the North American Plate at an average rate of about 1 inch (2.5 cm) per year.

Bolinas and present day Stinson Beach were once encompassed by Rancho Las Baulines, a Mexican land grant given by Governor Pío Pico to Gregorio Briones in 1846.

The first post office in the town of Bolinas opened in 1863.

In 1927, a 300-acre former dairy farm on the Big Mesa was subdivided into a grid of streets and 5,336 lots measuring 20' by 100'. Many of these lots were sold for $69.50 by the San Francisco Bulletin as a subscription promotion. Portions of the mesa, including sections of Ocean Parkway, have since eroded into the sea. A few streets on the mesa are paved and maintained by the county, but many are unpaved, and either maintained by adjoining property owners or completely unmaintained. The Big Mesa has no sewer system, and houses on the mesa have individual septic systems.

Bolinas' beaches were hit hard by the 1971 San Francisco Bay oil spill, with the community coming together to clean the beach of crude oil.

In November 1971, the Bolinas Community Public Utility District instituted a moratorium on new water permits, which halted the construction of new homes. The moratorium was based on the limited local water supply during the summer months and in drought years, and also serves to limit new development in Bolinas. In 1990, the BCPUD enacted a moratorium on new sewer connections, to address the limited capacity of the sewage collection system. Many lots, especially on the Big Mesa, remain undeveloped. 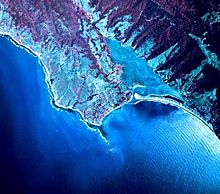 The census reported that 88.4 percent of the population lived in households and 11.6 percent lived in non-institutionalized group quarters. 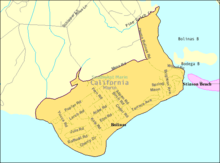 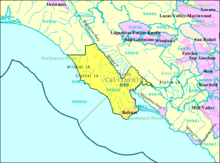 At the 2000 census there were 1,246 people in 486 households, including 260 families, in the CDP. The population density was 900.6 people per square mile (348.6/km2). There were 629 housing units at an average density of 454.7 per square mile (176.0/km2). The racial makeup of the CDP in 2000 was 77.7 percent non-Hispanic White, 0.5 percent non-Hispanic Black or African American, 0.2 percent Native American, 0.9 percent Asian, 0.2 percent Pacific Islander, 0.1 percent from other races, and 4.3 percent from two or more races. 16.0 percent of the population were Hispanic or Latino of any race. Of the 486 households 27.4 percent had children under the age of 18 living with them, 39.9 percent were married couples living together, 10.5 percent had a female householder with no husband present, and 46.3 percent were non-families. Of all households, 32.1 percent were one person and 4.5 percent had someone living alone who was 65 or older. The average household size was 2.29 and the average family size was 2.87.

The much larger area defined by the Census Bureau as Zip Code Tabulation Area 94924, which includes Horseshoe Hill, Dogtown, and Five Brooks, had a 2000 population of 1,560 people (see map).

Besides the public access beach near the downtown area, there is a county park, Agate Beach, which contains extensive tide pools that are protected as part of the Gulf of the Farallones National Marine Sanctuary. The town also hosts the Marin-Bolinas Botanical Gardens, and borders on the Point Reyes National Seashore to the north. Alamere Falls, one of only two beach waterfalls in the continental U.S., is on the California Coastal Trail from Palomarin Trailhead at the end of Mesa Rd.

In 1951, Ford Times identified Bolinas as the first in its series of "Tom Sawyer Towns... a good place for boys and girls to live and grow... its school days, its summer vacations, its vast adventures in fishing, swimming, baseball, basking and dreaming in the sun. Such a place is Bolinas."

All content from Kiddle encyclopedia articles (including the article images and facts) can be freely used under Attribution-ShareAlike license, unless stated otherwise. Cite this article:
Bolinas, California Facts for Kids. Kiddle Encyclopedia.