Stinson Beach is about a 35-minute drive from the Golden Gate Bridge on California's Highway 1. It is near important attractions such as Muir Woods National Monument, Muir Beach, and Mount Tamalpais. It has a long beach, where the cold water promotes fog throughout the year.

Stinson Beach is a popular day trip for people in the San Francisco Bay Area and for tourists visiting northern California. Although most visitors arrive by private car, Stinson Beach is linked to Marin City by a daily bus service, and the network of hiking trails around Mount Tamalpais also reaches the town. The beach is one of the cleanest in the state, and sandy, unlike the rockier neighboring beach in Bolinas.

Nathan H. Stinson bought land at the site in 1866.

In 1870, the first road was built along the Pacific coast from Sausalito, California, and a tent settlement sprang up amongst the willow trees at the beach, which gave rise to the town's original name, Willow Camp. The Mt. Tamalpais & Muir Woods Railway opened in 1896, making Willow Camp more accessible. Visitors could ride the train to West Point Inn and then hike or arrange a stagecoach to take them to the beach. In 1906, refugees from the San Francisco earthquake came to the area and built some of the area's first businesses. Stinson Beach became the official town name in 1916, in honor of the largest landowners, Rose and Nathan Stinson. 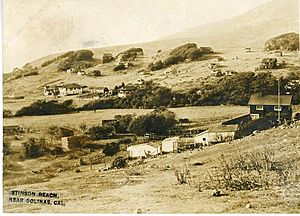 Stinson Beach is the home for GDTSToo, Inc., the mail order distribution company for the Fare Thee Well Tour (Dead50), and other musical acts. 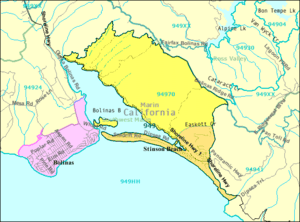 There were 374 households out of which 18.7% had children under the age of 18 living with them, 40.6% were married couples living together, 4.8% had a female householder with no husband present, and 52.4% were non-families. 42.0% of all households were made up of individuals and 11.0% had someone living alone who was 65 years of age or older. The average household size was 1.98 and the average family size was 2.75. 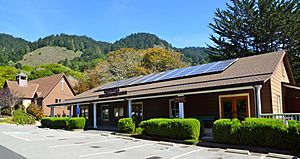 In 2002, a surfer was attacked by a 12-to-15-foot-long (3.7 to 4.6 m) great white shark, while surfing off Stinson Beach. The young man survived, but received more than 100 stitches to close his wounds. The attack was the second in Stinson Beach, and the 13th in Marin County since 1952. In 1998, Jonathan Kathrein was attacked by a great white shark, while paddling into the ocean. His injury from the shark bite required over 600 stitches. The surf off Stinson Beach is within an area known as the Red Triangle, where there have been an unusually high number of shark attacks.

Marin County added 12 tsunami warning signs to the Stinson Beach shoreline in 2012 to explain the risk to beachgoers.

On the second Sunday of June, the town serves as the ending point for the annual running of the Dipsea Race, the second-oldest foot race in the U.S. The California Road Club holds its Mount Tamalpais Hill Climb, one of the oldest bicycle races in the West, in early fall. Since 2002, the race has been held on the third Saturday of the month, with about 400 bicyclists competing in the 12.5-mile (20.1 km) road race from Stinson to the head of Bolinas Lagoon and on to the West summit of Mount Tamalpais at Rock Spring. "Cuisine On the Green" is a yearly event held in the town's central park The Village Green, each May. It features local restaurants and merchants selling a wide variety of foods, trinkets, clothing, art and novelty items at different booths. Talent local to the area often performs on the small park stage. Cuisine On the Green benefits the Stinson Beach Community Center. On July 4 of every year, a "tug-of-war" is held with Bolinas across the intlet dividing the two communities. 30 women from each shore pull against each other until a winner is declared, then 30 men from each take their turn. It is a slice of life, pure Americana and always contested both during the actual event and then after in the local bars of Smiley's and the Sand Dollar where the winner's trophies are displayed. 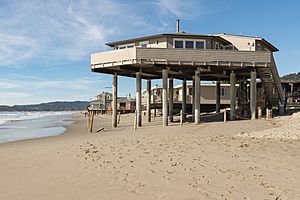 House on stilts in Stinson Beach

Residents, landowners, and summer people important in the development, life, and culture of Stinson Beach. Arrival or tenure is shown in square brackets. Birth and death dates are shown in parentheses.

Stinson Beach has been the setting and filming location for several movies:

The town was mentioned in an episode of M*A*S*H - The Merchant of Korea. In the episode, BJ borrows $200 from Charles to wire home to his wife as a down payment on the purchase of a one-acre lot with "trees, the beach, a view of San Francisco...everything!"

George Frayne (Commander Cody) wrote a song about Stinson Beach entitled "Midnight On The Strand." It was recorded on his 1987 album, Let's Rock.

The town and the beach are the topic of a poem by Garrison Keillor. In We Are Still Married: Stories and Letters, Keillor has a 4-page essay about his visits to Stinson Beach and how thinking of the beach helps him sleep.

The poet Robert Duncan wrote his influential collection Opening the Field at a house in Stinson Beach.

Some of Janis Joplin's cremated ashes were scattered along this beach as well as the Pacific Ocean.

The story of a young surfer's recovery from a shark attack is the subject of a book, Far From Shore.

All content from Kiddle encyclopedia articles (including the article images and facts) can be freely used under Attribution-ShareAlike license, unless stated otherwise. Cite this article:
Stinson Beach, California Facts for Kids. Kiddle Encyclopedia.