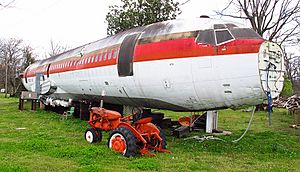 Bolivar was once the county seat, and Bolivar Landing was its port on the Mississippi River. Now permanently cut off from the river, Bolivar is a quiescent residential hamlet, while Bolivar Landing, immediately north and across the immense Mississippi Levee, is a cottage community on Lake Whittington.

When Bolivar County was established in 1836, the first county seat was located at Bolivar. William Vick sold 5 acres (2.0 ha) of land to the county for $800, and it was then named Bolivar. The land was surveyed by B.M. Hines, who laid out the courthouse square, with town lots around it which were advertised for sale. An order was passed by the Board of Police (later called "supervisors") in 1840 to build a one-room courthouse at a cost of $595.

Trusten Polk, a former U.S. Senator and Governor of Missouri, was captured by Union forces at Bolivar Landing in 1863, along with his wife and two daughters. In 1864, Union forces carried away cargo from Bolivar Landing, and set fire to several houses. Also in 1864, Confederate soldiers burned the USS Collier near Bolivar Landing, though the ship was not destroyed.

The U.S. Army Corps of Engineers completed the Caulk Island Cutoff in 1937, which diverted the course of the Mississippi River to enable a more direct route for shipping. This diversion removed Bolivar Landing from contiguous access to the Mississippi River (except for a small channel for recreational boats), and created Lake Whittington, an oxbow lake.

Mark Twain mentioned Bolivar Landing in his parody "River Intelligence", published in the New Orleans Crescent in 1859. The fictional river captain Sergeant Fathom states: "When me and DeSoto discovered the Mississippi, I could stand at Bolivar Landing (several miles above "Roaring Waters Bar") and pitch a biscuit to the main shore on the other side."

All content from Kiddle encyclopedia articles (including the article images and facts) can be freely used under Attribution-ShareAlike license, unless stated otherwise. Cite this article:
Bolivar, Mississippi Facts for Kids. Kiddle Encyclopedia.