Bolivar ( rhymes with Oliver) is a town in Jefferson County in the U.S. state of West Virginia's Eastern Panhandle. The population was 1,045 at the 2010 census. The citizens of Bolivar chose to name their town for the South American revolutionary leader Simón Bolívar (July 24, 1783 – December 17, 1830).

According to the United States Census Bureau, the town has a total area of 0.44 square miles (1.14 km2), all of it land.

There were 498 households, of which 23.5% had children under the age of 18 living with them, 40.8% were married couples living together, 9.0% had a female householder with no husband present, 3.6% had a male householder with no wife present, and 46.6% were non-families. 40.4% of all households were made up of individuals, and 15.6% had someone living alone who was 65 years of age or older. The average household size was 2.10 and the average family size was 2.81. 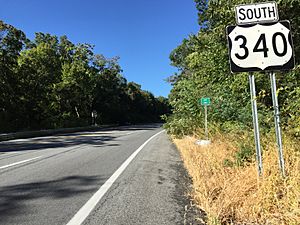 US 340 southbound in Bolivar

The only significant highway providing access to Bolivar is U.S. Route 340. Although signed north–south, the road runs generally eastward from Bolivar. It briefly passes through Harpers Ferry, then traverses the northern tip of Loudoun County, Virginia after crossing the Shenandoah River, quickly crosses the Potomac River into Maryland and eventually reaches its terminus at Frederick. To the west, U.S. Route 340 passes through Charles Town before turning southwest and traversing the eastern edge of Virginia's Shenandoah Valley. Bolivar and neighboring Harpers Ferry also host an unsigned alternate route of U.S. Route 340, which follows Washington Street through Bolivar.

All content from Kiddle encyclopedia articles (including the article images and facts) can be freely used under Attribution-ShareAlike license, unless stated otherwise. Cite this article:
Bolivar, West Virginia Facts for Kids. Kiddle Encyclopedia.