The Bollman Truss Railroad Bridge at Savage, Maryland is the sole surviving example of a revolutionary design in the history of American bridge engineering. The 160-foot (48.8 m) double-span is a suspension truss bridge. The first Bollman bridge was installed on the site; however, the current bridge is not the original. The current bridge was built in 1852 and moved to the site thirty years later. It is one of the oldest standing iron railroad bridges in the United States. Currently, however, it is in use carrying the Savage Mill Trail across the Little Patuxent River.

The Bollman design was the first successful all-metal bridge design to be adopted and consistently used on a railroad. The type was named for its inventor, Wendel Bollman, a self-educated Baltimore civil engineer. Bollman formed two companies in Baltimore, the W. Bollman and Company and the Patapsco Bridge Company, to market the bridge in North and South America.

In 1966 the American Society of Civil Engineers introduced a new program, designating the bridge as the first-ever Historic Civil Engineering Landmark. The bridge was listed on the National Register of Historic Places on December 18, 1972, and was designated a National Historic Landmark on February 16, 2000. 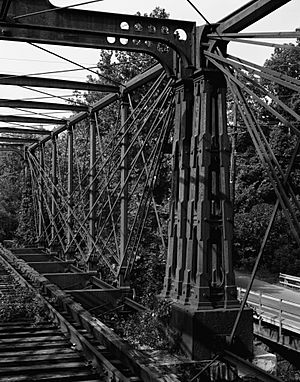 The bridge was built for an unknown location on the main line of the Baltimore and Ohio Railroad in 1852, and was moved to its present location, spanning the Little Patuxent River on the spur to the Savage Mill, in 1887. This spur line dates to around 1840 and originally crossed the river on a stone arch bridge; however, due to alterations to the mill in the 1880s and topographical restrictions, a replacement bridge was needed. The bridge remained in service until the mill closed in 1947; switching crews used additional cars in order to avoid crossing the bridge with locomotives, and thus there was never a need for a more substantial structure. A smaller, narrower example was installed adjacent to the railbridge for road traffic, which was torn down after World War I. 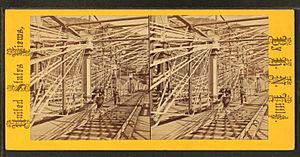 It was the first successful all-metal bridge design to be adopted and consistently used on a railroad. The design employs wrought iron tension members and cast iron compression members. It was an improvement over wooden structures, as the independent structural units lessened the possibility of structural failure. Patented on January 6, 1852, the company built about a hundred of these bridges through 1873. Their durability and ease of assembly greatly facilitated expansion of American railroads in this period. Bollman's Wills Creek Bridge has also survived, but it employs a different type of truss system.

The Bollman Bridge is a two-span through-truss, resting on granite abutments at each end and a granite pier in the middle of the river. The truss structure is a mixture of wrought and cast iron. The truss configuration is the design patented by Bollman as the "Bollman suspension truss" in 1852. Each span is 79.5 feet (24.2 m) long, 25.5 feet (7.8 m) wide and about 21 feet (6.4 m) tall. The Bollman truss suspends the deck from a network of tension members, while the top chord resists compressive forces. The system is therefore referred to as a suspension truss. Bollman published a booklet describing the Harpers Ferry bridge and the system in general as a “suspension and trussed bridge” which is accurate as the design lacks an active lower chord required of a strict truss bridge. Later descriptions used "suspension truss" for the design.

The truss includes decorative elements, such as Doric styled vertical members. The cast iron end towers, which bear transfer the weight of the structure to the abutments and pier, are also detailed. A decorative and protective metal enclosure at the top of the towers was lost to vandalism, but was replaced during the restoration work. Metal strips at each portal read "W. BOLLMAN, PATENTEE", "BALTIMORE, MD.", "BUILT BY B&O R.R. CO.", "1869" AND "RENEWED 1866". Replicas of the original strips were installed during the restoration.

The bridge was brightly painted, using red oxide for the towers and the heavier compression members and an ivory color for the lighter tension members. The bridge was originally painted in a three color scheme, documented in black and white photography, with specific shades unknown. 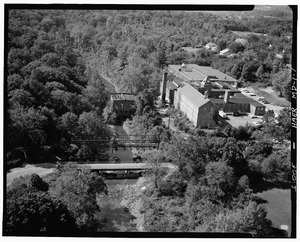 Savage Mill and Bollman Bridge in the 1970s

In 1966 the American Society of Civil Engineers introduced a new program, designating the bridge as the first-ever Historic Civil Engineering Landmark. The bridge was listed on the National Register of Historic Places on December 18, 1972, and was designated a National Historic Landmark on February 16, 2000. The bridge was surveyed for restoration in 1978 by Modjeski and Masters with deterioration of the floor trusses noted. A $214,200 restoration contract was let to Dewey-Jordan of Frederick in September 1982. The bridge was restored by Wallace, Montgomery & Associates, LLP, for the Howard County Department of Recreation and Parks in 1983, and more recently underwent additional preservation work and was rededicated on September 16, 2000. Today it receives regular maintenance as part of Savage Park. Nearby Bollman Bridge Elementary School takes its name from the historic bridge.

All content from Kiddle encyclopedia articles (including the article images and facts) can be freely used under Attribution-ShareAlike license, unless stated otherwise. Cite this article:
Bollman Truss Railroad Bridge Facts for Kids. Kiddle Encyclopedia.