The park's history could probably be the history of those buried there; old pioneers are buried in the Victorian-type cemetery. Established as a cemetery in 1840 on the outskirts of the new town of Wellington, separate burial areas were designated for Anglicans, Jews and Roman Catholics. Many notable people of the town were buried there, including William Wakefield, Wellington's founder. It was closed for burials in 1892, except for the new burials of kins; this was due to inadequate space as the city grew. 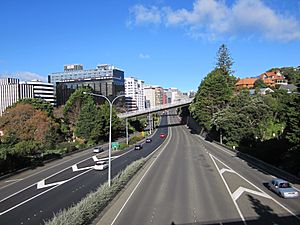 The park is bisected by the Wellington Urban Motorway.

In 1960, the City Council's urban plan established a need for a motorway, a part of which would be routed through the cemetery. Seven years later, the City Council passed an act to build a motorway through the park. As a result, the cemetery was closed as a burial ground from March 1967 through 1971. The historic cemetery, bisected by the Wellington Urban Motorway, caused extensive controversy at the time. The new motorway opened in 1978, and in the same year, the Wellington City Council Parks renamed the cemetery as the Bolton Street Memorial Park. Though the Friends of Bolton Street protested against the shifting of the graves, they did not stop construction of the road but ensured that the cemetery got a heritage status and the park got a reserve nomenclature. In spite of protests, about 3,700 graves were exhumed and relocated, most of whom were re-interred in a large vault beneath the park's lawn. The relocated parts of the cemetery with head stones are linked through a foot bridge over the road. Of the 8,500 people reported buried in the park, only 1334 headstones (made of marble or local stones) were traced and 35 are made in wood.

Historian Margaret Alington was commissioned to write a history of the cemetery. Her book, Unquiet Earth: a History of the Bolton Street Cemetery, was published in 1978.

The original grounds were 18 acres (7.3 ha) in size and was segmented. Approximately 7 acres (2.8 ha) were used by the Church of England, two roods and 37 perches were for Jews, and 8 acres (3.2 ha) were set aside for the public cemetery. The motorway takes up 3.7 acres (1.5 ha), encroaching about 4.5 acres (1.8 ha) of wooded burial ground. Some of the initial land was surrendered for the Bowen Street cutting and to Anderson Park. The current park, about 1.85 hectares (4.6 acres) in size, includes a land gift from Morva Williams.

The approach to the park is from Bolton Street, from a signed pathway off Bowen Street and from Botanic Garden, immediately after Anderson Park. There are walkways in the park on either side of the motorway, which have several signs giving Wellington's colonial history. The trail is popular among joggers; the Upper Trail is steep compared to the Lower Trail which in places have steps. Tutaenui creek is located in a gulley within the park. Bolton Street Memorial Park is now a historic reserve under the jurisdiction of the Parks and Recreation Department of the Wellington City Council. 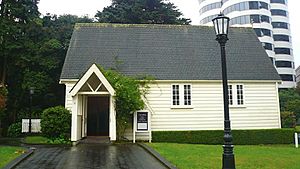 Of the initial three buildings constructed in the cemetery area, only one remains. The Church of England's Sexton's Cottage, a historic building built out of timber in 1857, was enlarged in 1885 and is now being restored. The public cemetery's Sexton's Cottage, also constructed of timber in 1857, was occupied by the sexton David Robertson and his family before the building was demolished in 1908; only its brick outlines are still viewable in the upper lawn. The Mortuary Chapel, built of timber in 1866, was left to deteriorate without any repairs and was finally demolished in 1969 to make way for the motorway. Based on recorded drawings of it, a replica chapel was built and serves as the visitor centre. Situated in the smaller half of the cemetery, it contains exhibits on the park's history, details of those buried at the cemetery, along with printed lists of names. A beehive centre is maintained by the Friends of Bolton Street Memorial Park who also facilitate information on conservation of the park's beehives.

The park also serves as an extension of Wellington Botanic Garden with areas of open lawns, undulating topography covered by a mix of regenerating native scrub and plantings of exotic trees, shrubs, perennials and bulbs. Notable is the heritage roses collection among the graves.

Flora in the park include Rosa banksiae (left) and mushrooms like this Amanita muscaria (right). 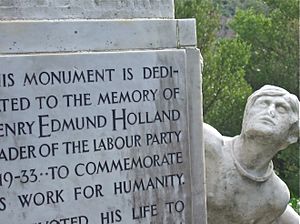 Detail of the Harry Holland monument showing a struggling worker

Reinstated monument after disinterment for motorway

All content from Kiddle encyclopedia articles (including the article images and facts) can be freely used under Attribution-ShareAlike license, unless stated otherwise. Cite this article:
Bolton Street Memorial Park Facts for Kids. Kiddle Encyclopedia.