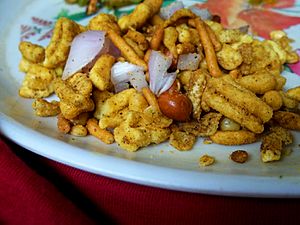 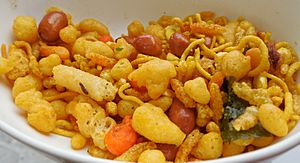 Bombay mix or chiwda is an Indian snack mix (namkeen) which consists of a variable mixture of spicy dried ingredients, such as fried lentils, peanuts, chickpea flour ghatia (sev), corn, vegetable oil, chickpeas, flaked rice, fried onion and curry leaves. This is all flavored with salt and a blend of spices that may include coriander and mustard seed. It is also a widely consumed snack in the United Kingdom.

All content from Kiddle encyclopedia articles (including the article images and facts) can be freely used under Attribution-ShareAlike license, unless stated otherwise. Cite this article:
Bombay mix Facts for Kids. Kiddle Encyclopedia.