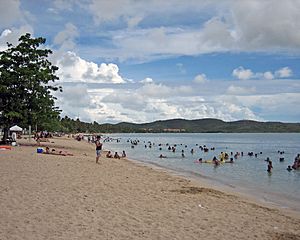 Boquerón is a beach village located in the city of Cabo Rojo, Puerto Rico. The village is one of the main tourist attractions in the southwestern part of the island. As of the United States 2000 Census, the barrio population was 4,963.

The village is home to two protected wildlife refuges. The Cabo Rojo National Wildlife Refuge is a habitat for a number of native bird species, including the endangered yellow-shouldered blackbird, also known as la mariquita de Puerto Rico or capitán. The Boqueron State Forest is one of seven state forests managed by the Puerto Rico Department of Natural and Environmental Resources.

According to local folklore, after the Puerto Rican pirate Roberto Cofresí shared some of his treasure with his family and friends, he would hide what was left over in a cave located in "Barrio Pedernales" which is just north of Boquerón Bay. Throughout the years no one has found any treasure in the cave.

Boquerón beach (Balneario de Boquerón) is a public beach and resort managed by the Puerto Rican government. It is rated as one of the best beaches in Puerto Rico along with Luquillo Beach. The beach was awarded Blue Flag Beach status by the Foundation for Environmental Education. Other beaches in Boquerón are Buyé and El Combate.

All content from Kiddle encyclopedia articles (including the article images and facts) can be freely used under Attribution-ShareAlike license, unless stated otherwise. Cite this article:
Boquerón, Cabo Rojo Facts for Kids. Kiddle Encyclopedia.