Luquillo is a municipality of Puerto Rico located in the northeast coast, northwest of Fajardo; and east of Rio Grande. Luquillo is spread over 5 wards and Luquillo Pueblo (The downtown area and the administrative center of the city). It is part of the Fajardo Metropolitan Statistical Area.

The city of Luquillo is 26 square miles and it sits on 12 miles of Atlantic coastline. It is nestled between the blue waters of the Atlantic and the El Yunque National Rainforest, giving it a diverse and unique ecology. Luquillo marks the beginning of the Northeast Ecological Corridor Nature Reserve which runs down the coast from Luquillo’s town square all the way down to the Seven Seas Beach in Fajardo. During certain times of the year, it is not unusual to encounter rare or endangered species of fauna (like the Leatherback Turtle) while visiting in Luquillo.

Luquillo was founded in 1797 and is known as "La Capital del Sol" (sun capital), "La Riviera de Puerto Rico" (Puerto Rico's riviera), and "Los Come Cocos" (The coconut eaters). The town was named after the Indian cacique Loquillo, who died a few years after the last Indian rebellion in 1513. 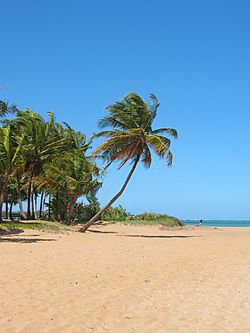 A view of Luquillo Beach

If you stay on the coastal highway going east from San Juan, you'll soon reach Luquillo Beach. This huge plantation of majestic coconut palms shades more than a mile of fine and shimmering sand. It is one of the most popular and nicest public beaches in the San Juan area. It offers cafeterias, public bathrooms with showers, access for disabled people, and an ample parking lot. Monserrate Beach is one of the public beaches most frequented by the locals. In 2006 El Balneario de Luquillo (The Luquillo Beach) was pronounced the most popular one in Puerto Rico. La Pared Beach is also very popular for its surf worthy waves.

La Selva, is a small cove on the east coast. It is arguably one of the best surf spots on the east coast. The only way to get to it is about a 2-mile walk through a cow farm, but it's worth the trip if you can talk someone into telling you how to get there.

It consists of three horizontal stripes, the blue top and green bottom are double of width of the yellow central stripe. Blue makes reference to the sky and the sea; yellow represents the sand of its beaches and green represents the vegetation of the mountains. In the center stripe resides the Coat Of Arms of the town superimposed and surrounded by two palm tree leaves crossed at the bottom.

In a gold background a centered mountain range with three green mountains is accompanied at the bottom by a bay with blue and silver waves; the top portion of the shield in blue, has three iris branches. Above the shield resides a three tower gold crown. Surrounding the shield by its flanks are two palms trees leaves crossed at the bottom.

All content from Kiddle encyclopedia articles (including the article images and facts) can be freely used under Attribution-ShareAlike license, unless stated otherwise. Cite this article:
Luquillo, Puerto Rico Facts for Kids. Kiddle Encyclopedia.