Río Grande is a town and municipality of Puerto Rico located on the eastern edge of the Northern Coastal Valley, north of Las Piedras, Naguabo and Ceiba; east of Loíza and Canóvanas and west of Luquillo. Río Grande is spread over eight barrios and Río Grande Pueblo (the downtown area and the administrative center of the city). It is part of the San Juan-Caguas-Guaynabo Metropolitan Statistical Area. A big portion of El Yunque National Forest, including El Yunque's peak, is located within the municipality.

Río Grande is home to one of the largest secluded areas with beach access (Coco Beach) on the entire island. Major hotels in the area include Wyndham Grand Rio Mar Resort and Gran Melia Puerto Rico Resort. Every March, the Trump International Golf Club plays host to the PGA Tour's Puerto Rico Open.

Within a ten-minute drive is El Yunque National Forest, the only tropical rain forest within the United States National Forest System and a finalist in the New 7 Wonders of Nature receiving thousands of votes from around the globe at www.n7w.com.

In 1894, while a Spanish colony, the population of Río Grande was 6,237. Puerto Rico was ceded by Spain in the aftermath of the Spanish–American War under the terms of the Treaty of Paris of 1898 and became a territory of the United States. In 1899, the United States conducted its first census of Puerto Rico finding that the population of Río Grande was 12,365. 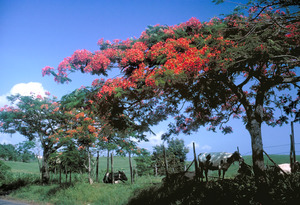 The municipality has agricultural activity that produces fruits, vegetables, ornamental plants, and cattle.

Local retail stores are aside highway PR-3. There is one large shopping mall located on 65th Infantry expressway and 956th street. The northeastern area of Puerto Rico has attracted hotels, shopping malls, sport venues among others. In 2012 the Puerto Rico Highway 66, which provides easy access to San Juan, was opened which runs along the municipality.

In 2019, volunteers and police who formed a group called Consejo Comunitario de Seguridad de Río Piedras celebrated their 32nd year aiding local businesses with security issues. This group works to ensure the safety and security of business patrons in the downtown area of Río Piedras.

There are 48 bridges in Río Grande.

All content from Kiddle encyclopedia articles (including the article images and facts) can be freely used under Attribution-ShareAlike license, unless stated otherwise. Cite this article:
Río Grande, Puerto Rico Facts for Kids. Kiddle Encyclopedia.