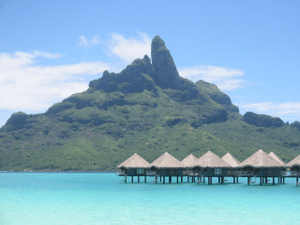 Bora Bora is a small island in the Leeward group of the Society Islands of French Polynesia, an overseas territory of France in the Pacific Ocean. Vaitape is the largest city on the island with 4,000 people. There is an airport on an islet where residents can fly to other islands in French Polynesia. Bora Bora has one main road which runs around the island.

The Bora Bora group has a permanent population of 9690.

In ancient times the island was called "Pora pora mai te pora", meaning "created by the gods" in the local Tahitian dialect. This was often abbreviated Pora Pora meaning simply first born. Because of ambiguities in the phonemes of the Tahitian language, this could also be pronounced Bola Bola or Bora Bora. When explorer Jacob Roggeveen first landed on the island, he and his crew adopted the name Bora Bora which has stood ever since. 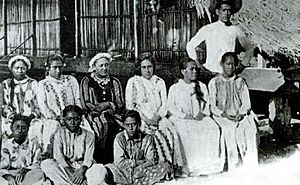 Queen Teriimaevarua III and her maids of honor, c. 1899

The island was inhabited by Polynesian settlers around the 4th century C.E. The first European sighting was made by Jakob Roggeveen in 1722. James Cook sighted the island in 1769 and landed that same year, using Tupaia as a navigator. The London Missionary Society arrived in 1820 and founded a Protestant church in 1890. Bora Bora was an independent kingdom until 1888 when its last queen Teriimaevarua III was forced to abdicate by the French who annexed the island as a colony.

In World War II the United States chose Bora Bora as a South Pacific military supply base, and an oil depot, airstrip, seaplane base, and defensive fortifications were constructed. Known as "Operation Bobcat", it maintained a supply force of nine ships, 20,000 tons of equipment and nearly 7,000 men. Seven artillery guns were set up at strategic points around the island to protect it against potential military attack.

However, the island saw no combat as the American presence on Bora Bora went uncontested over the course of the war. The base was officially closed on June 2, 1946. The World War II airstrip was never able to accommodate large aircraft, but it nonetheless was French Polynesia's only international airport until Faa'a International Airport opened next to Papeete, Tahiti, in 1960.

The commune of Bora-Bora is made up of the island of Bora Bora proper with its surrounding islets emerging from the coral reef, 29.3 km2 (11.3 sq mi) in total. The surrounding islets include Motu Tapu, Motu Ahuna, Tevairoa, Motu Tane, Motu Mute, Motu Tufari, Motu Tehotu, Motu Pitiaau, Sofitel Motu, Motu Toopua, and Toopuaiti. The commune also includes the atoll of Tupai (11 km2 or 4.2 sq mi), located 20 kilometres (12 mi) north of Bora Bora. The atoll of Tupai has no permanent population apart from about 50 workers in the coconut plantations.

The commune is an administrative subdivision of the Leeward Islands and consists of the following associated communes:

The administrative centre of the commune is the settlement of Vaitape, on the island of Bora Bora proper. President of French Polynesia Édouard Fritch is the current mayor of Bora Bora in addition to being the President. 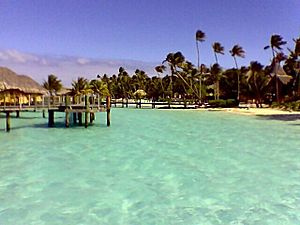 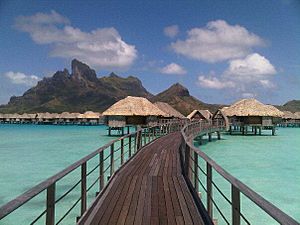 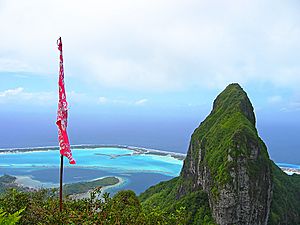 The island's economy is driven almost solely by tourism. Several resorts have been built on motu (small islands, from Tahitian) surrounding the lagoon. Hotel Bora Bora opened in 1961, and nine years later built the first over-the-water bungalows on stilts over the lagoon. Today, over-water bungalows are a standard feature of most Bora Bora resorts. The quality of those bungalows ranges from comparably cheap, basic accommodations to very luxurious and expensive places to stay.

Most of the tourist destinations are aqua-centric; however it is possible to visit attractions on land such as WWII cannons. Air Tahiti has five or six flights daily to the Bora Bora Airport on Motu Mute from Tahiti (as well as from other islands).

Public transport on the island is nonexistent so rental cars and bicycles are the recommended methods of transport. There are also small, two-seater buggies for hire in Vaitape. It is possible to rent a motorboat to explore the lagoon.

Snorkeling and scuba diving in and around the lagoon of Bora Bora are popular activities. Many species of sharks and rays inhabit the surrounding body of water. There are a few dive operators on the island offering manta ray dives and also shark-feeding dives.

In addition to the existing islands of Bora Bora, the new manmade motu of Motu Marfo has been added in the northeastern corner of the lagoon on the property of the St. Regis Resort.

Most rainfall occurs during the summer months (November to April) and is accompanied by high humidity, although clear days are not unknown in mid-January.

All content from Kiddle encyclopedia articles (including the article images and facts) can be freely used under Attribution-ShareAlike license, unless stated otherwise. Cite this article:
Bora Bora Facts for Kids. Kiddle Encyclopedia.