Kids Encyclopedia Facts
Not to be confused with Borden County, Texas. 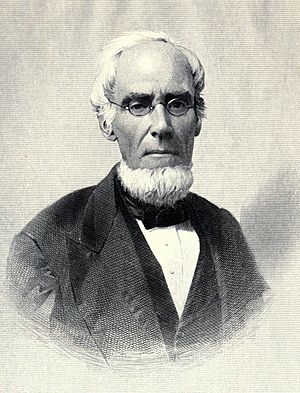 Gail Borden, the namesake of the community

The community was known as Harvey's Creek Settlement before the U.S. Civil War. After the war ended, Gail Borden returned to Texas, and at what would become Borden, built houses for himself, his brother, and his sons. He renamed the settlement Bordenville. The Galveston, Harrisburg and San Antonio Railway opened its line through the Borden area in 1872.

All content from Kiddle encyclopedia articles (including the article images and facts) can be freely used under Attribution-ShareAlike license, unless stated otherwise. Cite this article:
Borden, Texas Facts for Kids. Kiddle Encyclopedia.