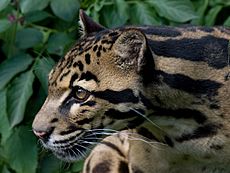 The Sunda clouded leopard is the largest cat in Borneo, weighing around 12 to 25 kg (26 to 55 lb). The canine teeth are two inches long, which, in proportion, are longer than other living felines. Its tail, which may be as long as its body, helps it balance when running and jumping.

In Borneo, they occur in lowland rainforest. In Sumatra, they appear to live more in hilly, montane areas. It is not known if there are still Sunda clouded leopards on the small Batu islands close to Sumatra.

In December 2006, the genus Neofelis was reclassified into two distinct species:

The Sunda clouded leopard in each island is different enough to be a separate subspecies.

All content from Kiddle encyclopedia articles (including the article images and facts) can be freely used under Attribution-ShareAlike license, unless stated otherwise. Cite this article:
Sunda clouded leopard Facts for Kids. Kiddle Encyclopedia.