Bororen is a town and locality in the Gladstone Region, Queensland, Australia. In the 2011 census, Bororen had a population of 417 people. 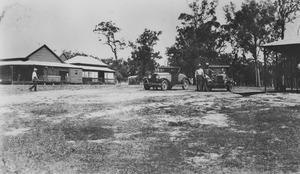 Street scene in Bororen in the Gladstone district ca. 1930

The Bruce Highway passes through both the town and the locality.

Bororen Post Office opened 2 June 1898; a receiving office had been open since about October 1897.

Bororen Provisional School opened on 22 January 1900. It became a State School in 1909.

All content from Kiddle encyclopedia articles (including the article images and facts) can be freely used under Attribution-ShareAlike license, unless stated otherwise. Cite this article:
Bororen, Queensland Facts for Kids. Kiddle Encyclopedia.