Boulder is a town in Garfield County, Utah, United States, 27 miles (44 km) northeast of Escalante on Utah Scenic Byway 12 at its intersection with the Burr Trail. As of the 2010 census, the town population was 226, an increase of nearly 26% over the 2000 figure of 180.

Boulder, quite isolated until the Civilian Conservation Corps built a road from Escalante, did not get electric power until 1947. The town marks the western terminus of Burr Trail, a mostly paved road that runs eastward through spectacular red rock country to the Waterpocket Fold in Capitol Reef National Park. Boulder is the home of Anasazi Indian State Park.

According to the United States Census Bureau, the town has a total area of 20.9 square miles (54.2 km²), none of which is covered with water. Boulder also has many sandstone formations, such as small mountains and slopes.

According to the Köppen Climate Classification system, Boulder has a semi-arid climate, abbreviated "BSk" on climate maps. 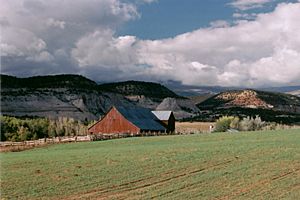 Barn outside of Boulder

There were 65 households, out of which 33.8% had children under the age of 18 living with them, 52.3% were married couples living together, 4.6% had a female householder with no husband present, and 36.9% were non-families. 27.7% of all households were made up of individuals, and 9.2% had someone living alone who was 65 years of age or older. The average household size was 2.77 and the average family size was 3.54.

All content from Kiddle encyclopedia articles (including the article images and facts) can be freely used under Attribution-ShareAlike license, unless stated otherwise. Cite this article:
Boulder, Utah Facts for Kids. Kiddle Encyclopedia.